Last week, we finally took our belated honeymoon to Skiathos, Greece. And holy olive oil, what a trip.

Why Skiathos out of Greece’s six-thousand-ish islands? Because Matt’s favorite movie is Mama Mia!, which was partly filmed there! Okay, kidding. Real answer: The sand beaches. And the fact that the island is very lush and green. And it’s only a two-hour flight from Vienna.

We stayed at the Atrium Hotel in Agia Paraskevi, a small tourist town that mostly attracts British retirees. The Atrium was the first hotel we looked at, and we kept coming back to it for the lovely views — and the promise of our very own Jacuzzi.

The view from the top of the hotel. 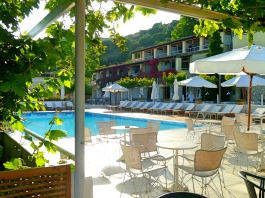 The Atrium’s center of gravity. 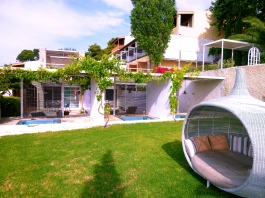 The middle one was ours.

We spent much of our time on Agia Paraskevi Beach. On our first full day, a couple of swans came to visit. These guys are semi-famous, but they usually hang out on a different part of island. We took their presence on our beach as a good omen for the week.

After a couple of lazy days on AP, we headed west to Koukounaries, Skiathos’s most popular (read: populated) beach. Arguably the best swimming beach on the island. Arguably.

The next day, we rented an ATV to explore the island’s northern beaches, most of which are accessible only via rough dirt roads. We didn’t admit to each other that neither of us had ever actually been on an ATV until after this little adventure. Fun fact: We rented a particularly touchy vehicle that didn’t always start on command. And yeah, no, we didn’t bring a phone. Onward!

A man and his ATV. 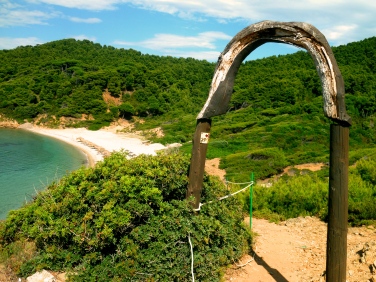 We followed a steep path down to Agistros Beach. 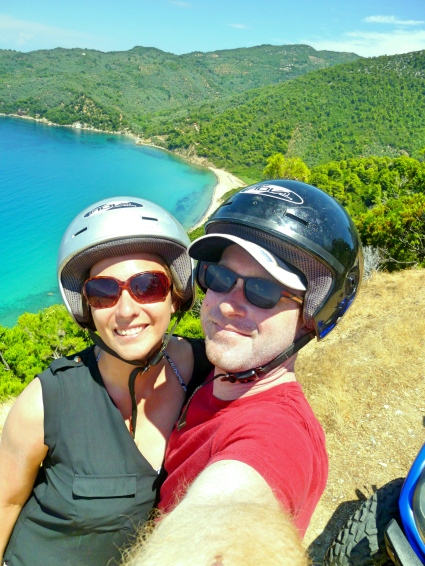 Elias Beach has a long, shallow shelf. And, um, nudists. 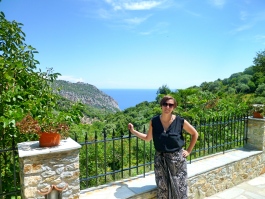 Outside the Evangelistria Monastery.

The best for last: Mandraki Beach, before a storm.

We then signed up for a boat tour to visit Lalaria Beach, named for its iconic white rocks that are so iconic you’ll get a fine if the pebble police catch you taking one as a souvenir. Lalaria is one of the most photographed beaches in Greece, and “they” say that if you swim through the arch, you’ll find true love. And if you swim through it three times, you’ll be blessed with eternal youth. Since we’ve already found true love, we swam through it three times. And I promptly had a back spasm.

The tour also took us to the Kastro, the ruins of Skiathos’s medieval capital, which folks built on a cliff to get away from pirates. (Ironically, our boat crew claimed to be pirates.)

We then crossed over the Aegean to Kati Yorgis, a small fishing village on mainland Greece. Emphasis on small. Along the way, about a dozen dolphins came up to say yassou. (Video by the Kalypso crew!)

Our last activity was a walking tour around Skiathos Town. We got lost in the Old Port area, did some shopping along Papadiamanti Street, and ate our first and only “real” Greek gyro. 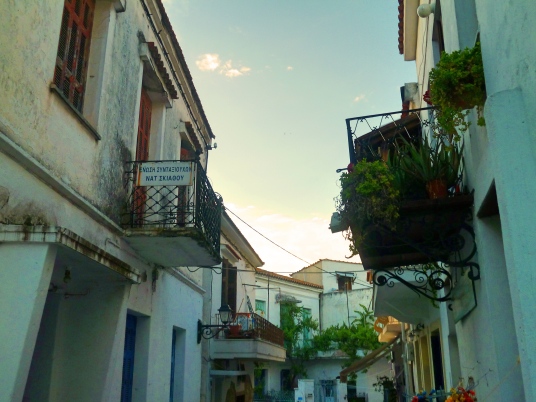 Our map was more approximate than accurate.

Protective charms against the evil eye were everywhere. 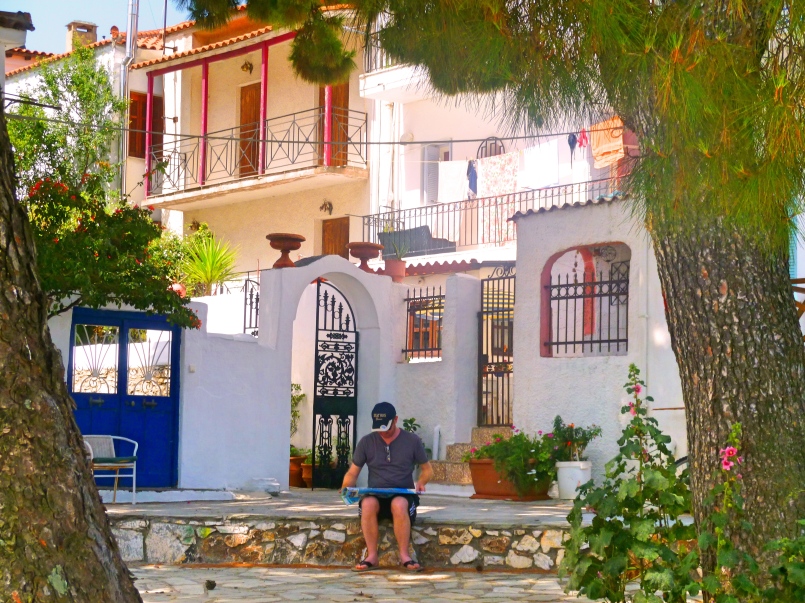 When we weren’t exploring new beaches or side streets, we were eating. AP has some really great tavernas, and we tried several. I ate a goat farm’s worth of feta, and Matt consumed his weight in olives. We also tried a couple of different soulvakis, or meat skewers; stewed rabbit; various lamb dishes; several versions of tzatziki; baklava; and a Skopelos cheese “pie.” Every taverna works a little differently, but the proprietor usually offers something on the house at the end of the meal. Most commonly, the gift is a shot of Ouzo. Yamas!

All in all, we set foot on ten different beaches over the course of the week, and we saw many, many more. If you’ve made it all the way to the end of this post, there’s just one more thing to say: Ef Charisto! Thank you!