Today we went back to the Madison Children’s Museum for a formal tour with the rental director and had a chance to ask our biggest questions about the place.

How does the ceremony space on the rooftop garden work? We don’t actually stand on this rock, do we?

Answer: Yes, you really do stand on that rock.

Sandy isn’t sure the rooftop setting will work for a ceremony. It’s a darling space for cocktails and wandering around during the reception, but, well, she’s not feeling the rock of vows or its alternative: the giant metal chicken arch at the other end of the garden. 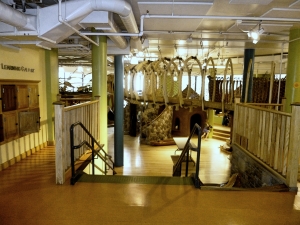 With the indoor option, we could have an aisle and an alter-ish thing situated between two faux mud huts, which Sandy kind of digs, and under a bone bridge, which Matt really doesn’t.

So, where does this leave us in terms of picking a venue that’s fun but also realistically functional for both the ceremony and reception?

Answer: We have no idea.