This weekend, we took a train to Innsbruck, Austria’s picturesque medieval mountain city. Along the way, we were a little surprised to find ourselves in southern Germany — apparently one must leave Austria in order to get to the other end of it.

Anyway. Once there, we settled into a lovely little AirBnB room and set off to explore Old Town. After a heavy Tirolean dinner, we visited the “Goldenes Dachl” (Golden Roof). The Roof is a big deal in Innsbruck; it’s considered their most iconic landmark and bazillions of people stop to take pictures of it. 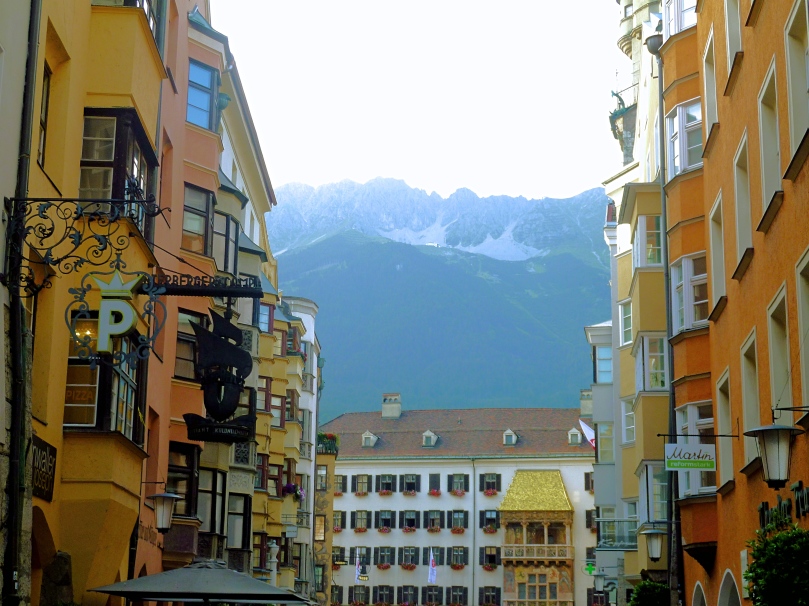 The real purpose for our visit, though, was some fresh mountain air. We’ve been watching lots of documentaries about mountain climbers lately and feeling inspired. So, in the morning, we took a cable car into the Nordkette range of the Alps. We had what we thought was a brilliant idea: ride to the top and hike our way down. We began our day at Hefelekarspitze, a summit 7,657 feet above sea level. The views really are spectacular. 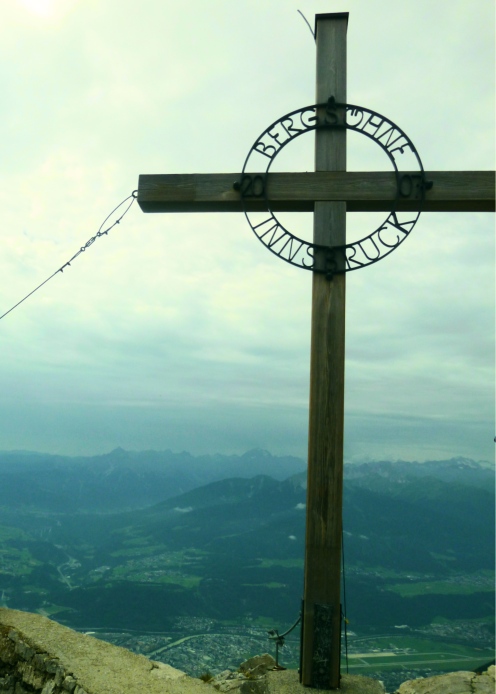 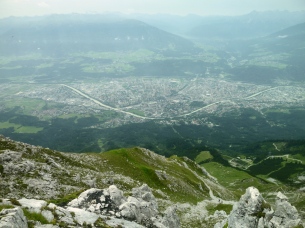 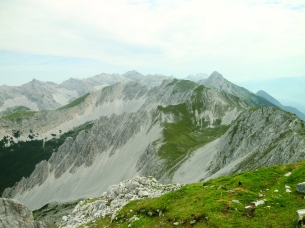 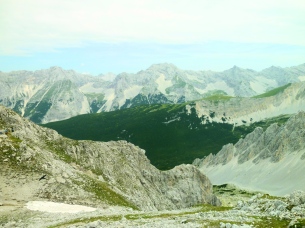 That white strip to the left is snow. 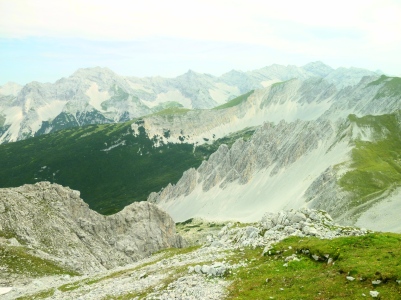 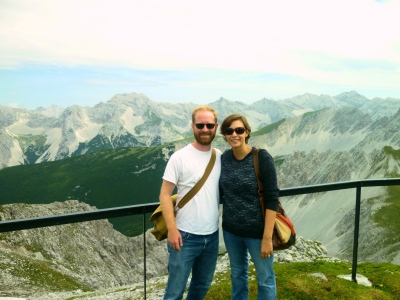 But everything that goes up must come down. We had the first inkling of doubt about our plan when we located the trailhead:

Down we went anyway, along a thin switchback trail marked only by rocks painted with Austrian flags. 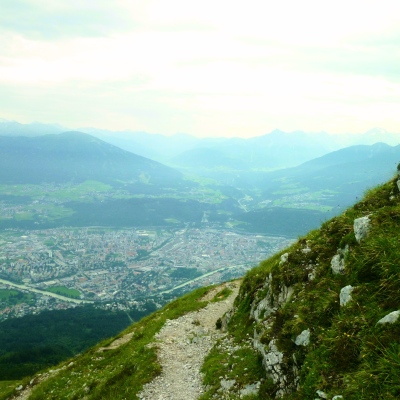 Not much room for error here. 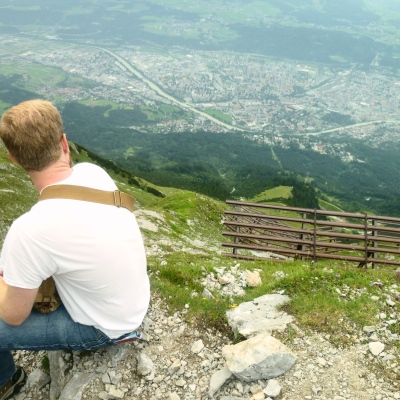 It took us about an hour to hike to the next cable car station (Seegrube). Ten minutes from it, Matt tripped and slid off the trail. He wasn’t hurt, but the sole of his shoe came off. We tied it back on with his shoelace and thought, well, every good mountain story needs a moment of crisis. After all, 80 percent of accidents happen on the way down. So, onward we went across a rockslide field to the station, where we ordered a hearty lunch and basked in the glory of our success.

At Seegrube, we faced a choice. Take the cable car or continue on foot to Hungerburg, the little town from which we could hop on a bus back to our apartment. Despite our way-too-full bellies, Matt’s broken shoe, our already-twinging knees, and, well, common sense, we opted to carry on. It was only supposed to be a two-hour hike. No big deal after what we’d just accomplished, right?

I blame the thin Alpine air. I mean, we were practically in the death zone. We can’t be held accountable for our decisions up there.

Fun fact: The journey from Seegrube to Hungerburg is arguably HARDER than the trail from the summit. Sure, there’s a road to follow, but that road is composed of loose gravel and is surprisingly steep in some portions. We tried to ignore the daredevil bikers and older people with walking sticks whizzing by us.

In a moment of weakness, we opted for a shortcut via a set of steps, but that ended up slowing us down even more because, well, steps are hard. And then it rained. A lot. We took shelter under a large pine tree and waited out the thunder. Then we took a wrong turn and had to backtrack. And somewhere along the way, we lost the signs for Hungerburg.

Morale was low, and we weren’t sure how much longer we could go on. Just then, we stumbled onto a park, complete with a playground and a water fountain. And for the first time, we looked back at just how far we’d come.

We rallied. We gave up on the confusing road entirely and followed the cable car line along an overgrown trail that was technically closed (the clue was the rope we crawled under). Finally, almost an hour behind schedule, we stumbled into Hungerburg.

At least we didn’t have any frostbitten limbs.

We’d originally planned to spend two days hiking, but we both agreed that one epic adventure was enough for the weekend. (Our leg muscles were also on fire.) Instead, we stuck to Old Town and some of Innsbruck’s other attractions, including the Alpenzoo, which is supposedly the highest zoo in the world and focuses on mountain animals.

One night at dinner, we met a couple of project managers from Swarovski, the crystal glass company that’s located near Innsbruck. One showed us pictures of his hike to the Mount Everest base camp. He swore it was easier than what we’d just done.

Though we don’t entirely believe him, we’ve both always been interested in Nepal …