Birmingham, Birmingham, Birmingham. In my first three weeks in Tuscaloosa, I’ve already heard a ton about Birmingham — as if the “Magic City” is a Promised Land of sorts for yuppie thirty-somethings who end up in northern Alabama. So this weekend, we decided to check it out and see what all the fuss is about.

Over the next few months, Matt and I plan to explore B’ham one neighborhood at a time, and we kicked off our expeditions with a visit to Avondale, one of the city’s most well-known up-and-coming corners.

Though North Avondale and East Avondale are distinct neighborhoods in their own right, when you hear someone say “Avondale,” they’re usually referring to Forest Park/South Avondale, a squiggly, sort-of-star-shaped area anchored by Avondale Park and Highland Golf Course. Avondale is especially known for a ten-block stretch along 41st Street South that’s come to symbolize Birmingham’s revitalization. 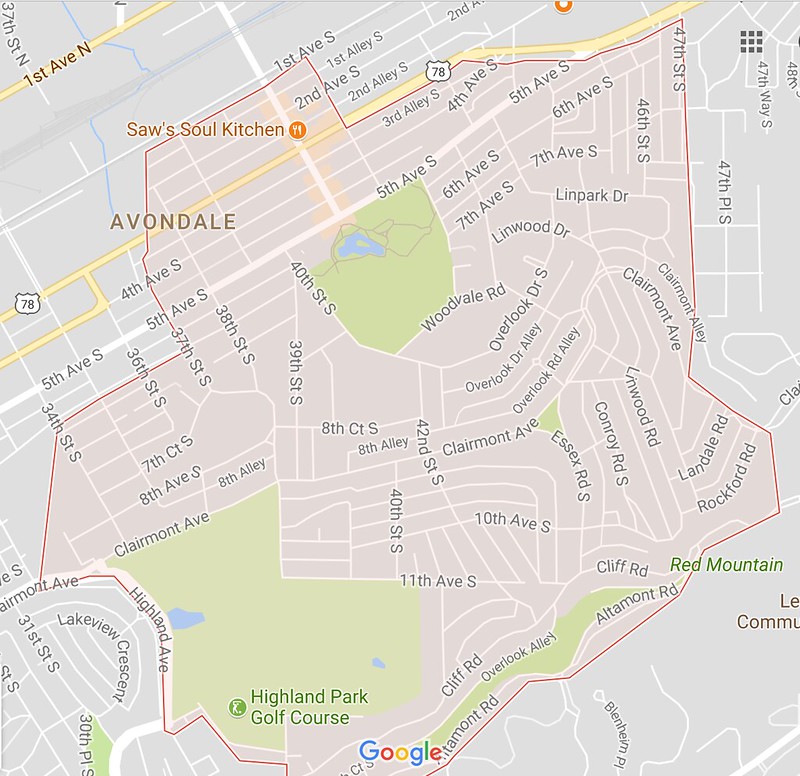 It all got started over beer, of course. Specifically, the Avondale Brewing Company, which opened in 2010 in a vacant building that was constructed in 1885 as a bunkhouse for railroad employees. 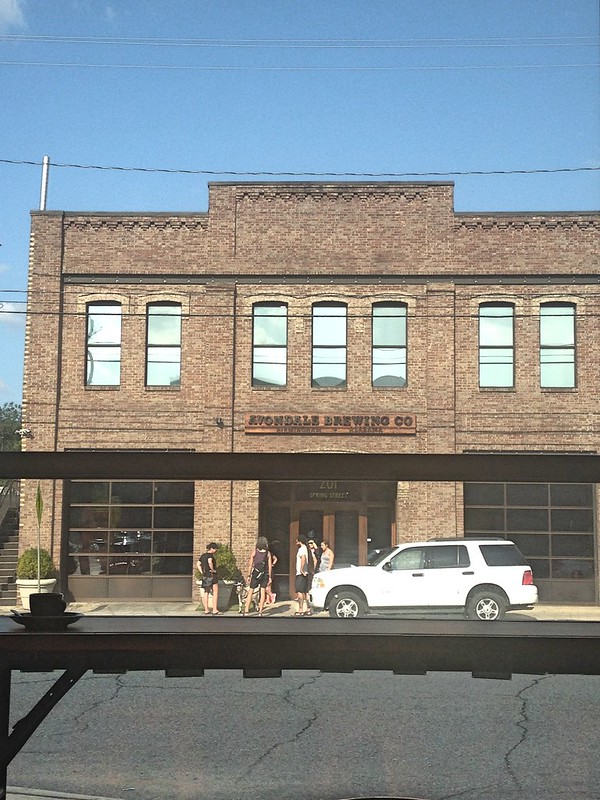 The view of Avondale Brewing Company from inside Saturn, a space-themed coffee shop and arcade that also moonlights as a live stage. 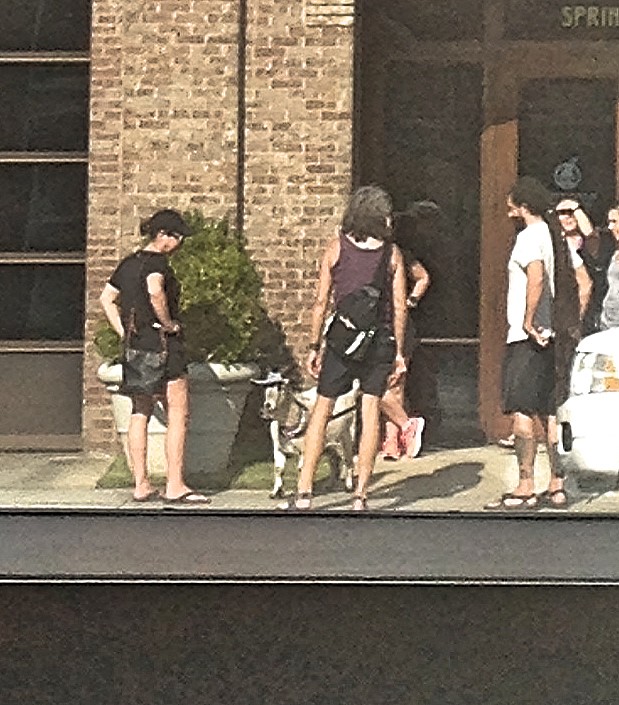 Yep, that’s a goat in front of the brewery. Because goats get thirsty, too.

Behind the brewery is a large outdoor beer garden and stage. A Grateful Dead tribute band played the day we visited, and the garden was totally packed. 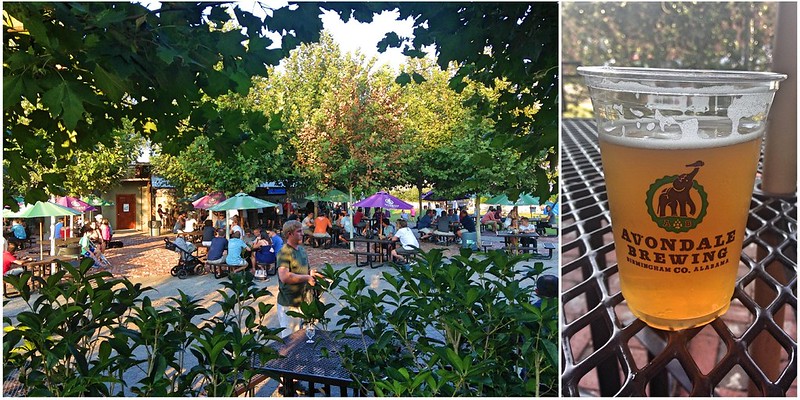 Why the elephant logo? It’s not a nod to UA’s mascot nor is it a Republican thing. That’s Miss Fancy, an Indian elephant who lived in the zoo at Avondale Park through the 1910s and 20s. She was known her periodic escapes — and her taste for whiskey.

Since the brewery opened, several cafes and restaurants have sprung up around it, including SAW’s Soul Kitchen, which serves BBQ and comfort foods with a twist; Post Office Pies, a wood-fired pizza parlor in a historic post office; Rowe’s, a former auto service station that now fixes up burgers and sandwiches; Fancy’s on 5th, an upscale oyster bar; and Melt, the brick-and-morter version of a popular grilled-cheese food truck. 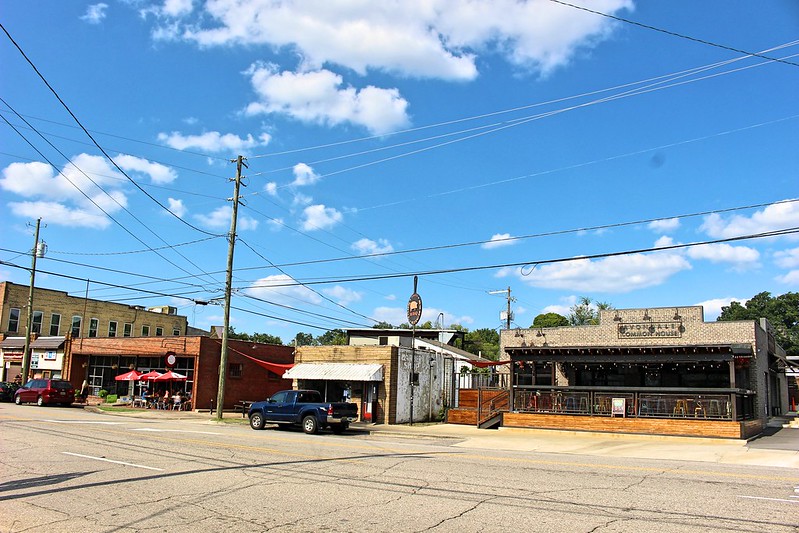 It’s an awesome stretch of eats and drinks, but it’s important to keep a sense of humor as you taste test your way along 41st. Our middle-aged neighbors at Post Office Pies talked loudly about the fact that they were all actively tripping on acid, and at Saturn Cafe, a kid plopped down and stayed at our table as his parents just … watched. Avondale folk also seem have a peculiar aversion to wearing shoes, even inside the restaurants.

Anyway, 41st Street dead ends into Avondale Park, and the lagoon, batting cages, and amphitheater are all easily walkable from the parking lot. 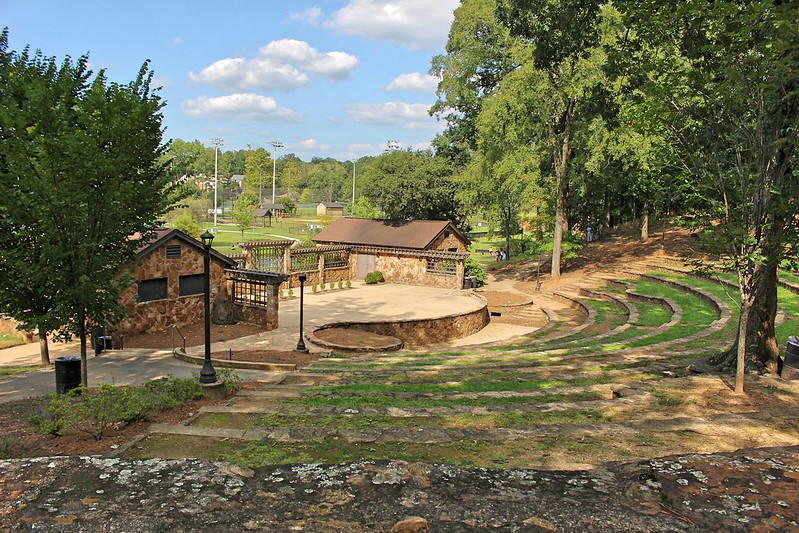 The outdoor stage at Avondale Park.

Unfortunately, the park gets pretty seedy as you head toward the public library, and I wasn’t especially comfortable walking around by myself, even in the middle of the day. 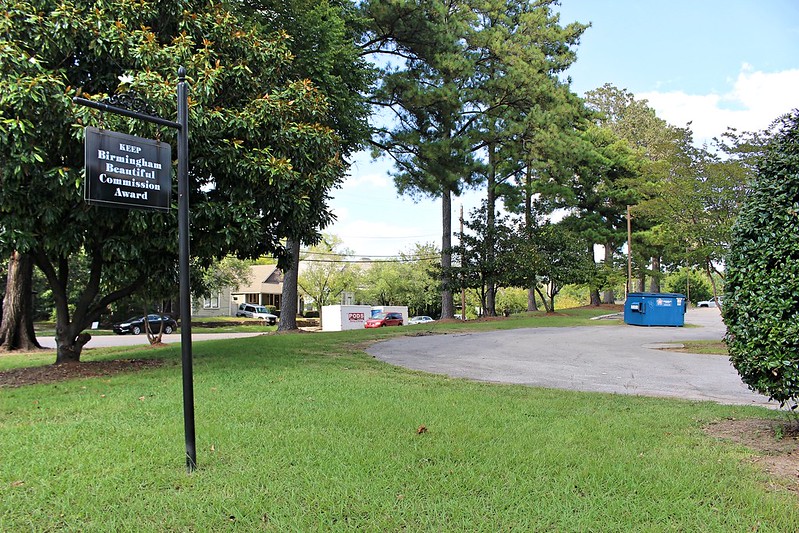 It was about here that I had to leave the park to avoid an aggressive vagrant. I also found this sign a little ironic considering the full dumpster in the background.

The park was a big reminder that Avondale is a neighborhood still very much in the midst of change, whether you call that change gentrification or growth or both. The trendy restaurants are nestled between still-vacant and vandalized buildings, and new arts & crafts bungalows are adjacent to crumbling mid-century moderns.

The politics here are obvious, but a hearty pint of craft beer helped dull our conflicted feelings a bit. We’re rooting for Avondale — and for everyone who calls this neighborhood home. 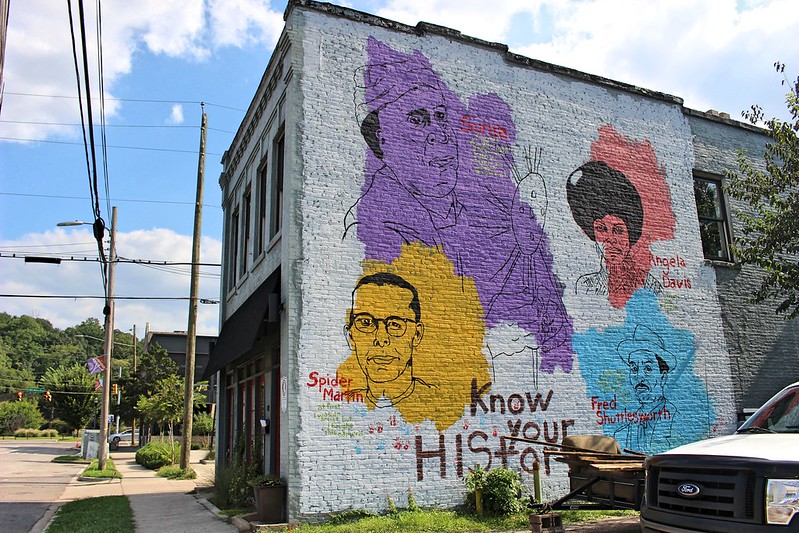 Mural on the side of the Spring Street Fire Station, originally built in 1890.

One thought on “Birmingham’s Avondale Neighborhood”