This weekend we attempted a fairytale quest through southern Germany. Instead, we learned some lessons about hotel thieves. But hey, at least there was plenty of beer to drink away the pain of dealing with Bavarians.

Confession time: We stopped in Munich during our backpacking trip four years ago, and we had a terrible time. We arrived too late to find a hotel room and spent one awful night in the train station before fleeing to Italy. There are few things that will make you question your life choices more than getting smirked at by teenagers in lederhosen at 4 a.m.

Anyway. We wanted to give Munich another shot, and this time we made a hotel reservation. 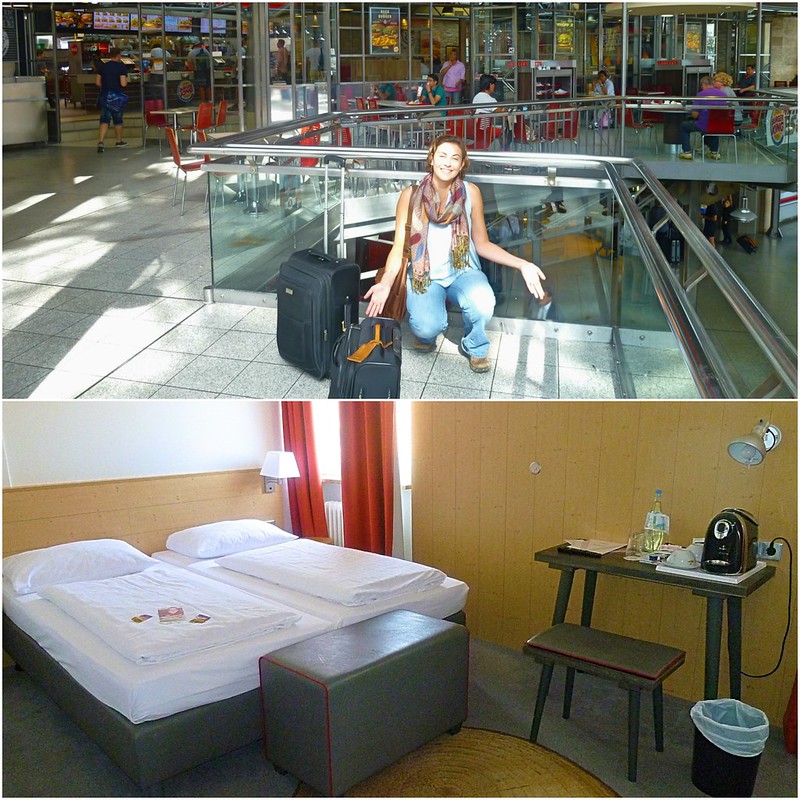 Above: Our lodging on our first visit to Munich. Sorry, Moms.
Below: Second time digs.

Now, we just so happened to make our non-refundable reservation for the first weekend of Oktoberfest. This really wasn’t intentional; we assumed Oktoberfest was in, well, October. (We probably should have been tipped off by the enormous spike in hotel rates the day we planned to leave …) We don’t like big, rowdy crowds, so we had no intention of navigating the festival proper. But we definitely got a flavor of what was to come. 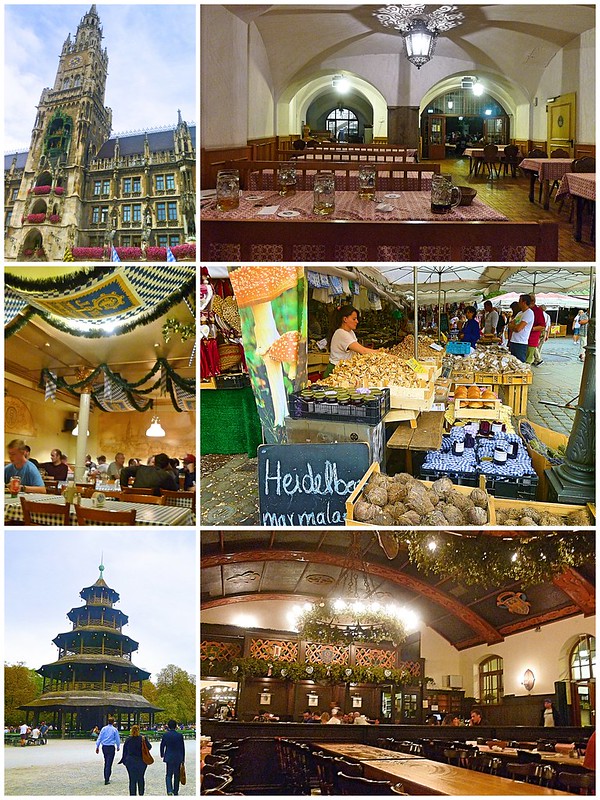 Our time in Munich was off to a good start, and the next morning we happily hustled to visit a little hamlet that’s home to one of the biggest tourist attractions in Germany: Neuschwanstein Castle.

Neuschwanstein is the castle that inspired the Disneyworld Castle. But unlike Sleeping Beauty, the real-life occupant of Neuschwanstein (who only spent 11 nights total in the castle) didn’t exactly have a happy ending. Begun in 1869, Neuschwanstein was more of an artistic project than a defensive one, and the expense of it was unpopular with the locals — especially since the Bavarian king already had two other castles in the area. So, Ludwig II was declared insane and arrested, which halted construction. By the time the king “mysteriously died” in 1886, only 15 of the planned 200 interior rooms were finished, and the castle remains incomplete to this day. 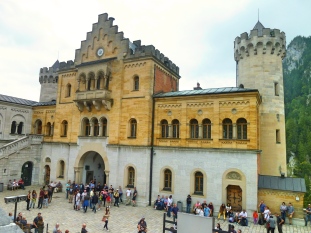 Here’s the “money shot” of the castle from Marienbrucke, a nearby bridge that offers the best view of the entire castle: 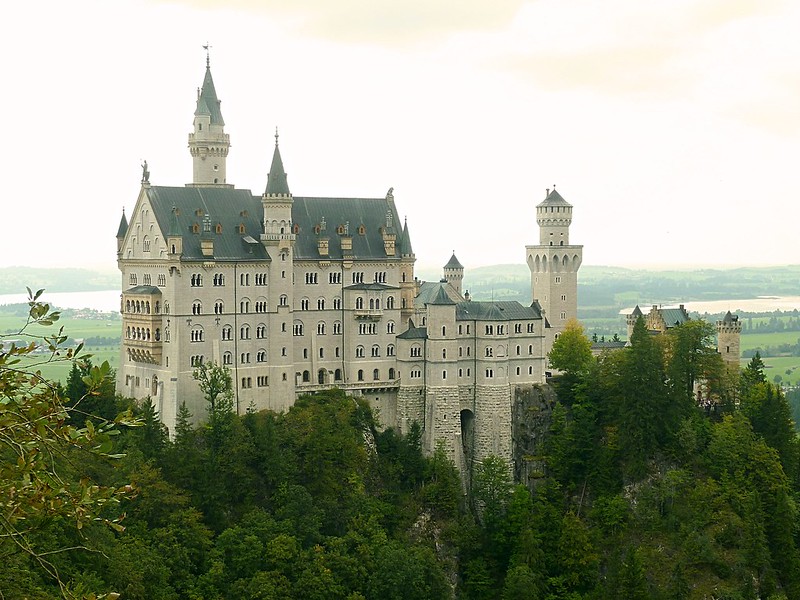 Now here’s the reality of getting this photo: you jostle against dozens of other people on a narrow row of wooden boards suspended above a large gorge. 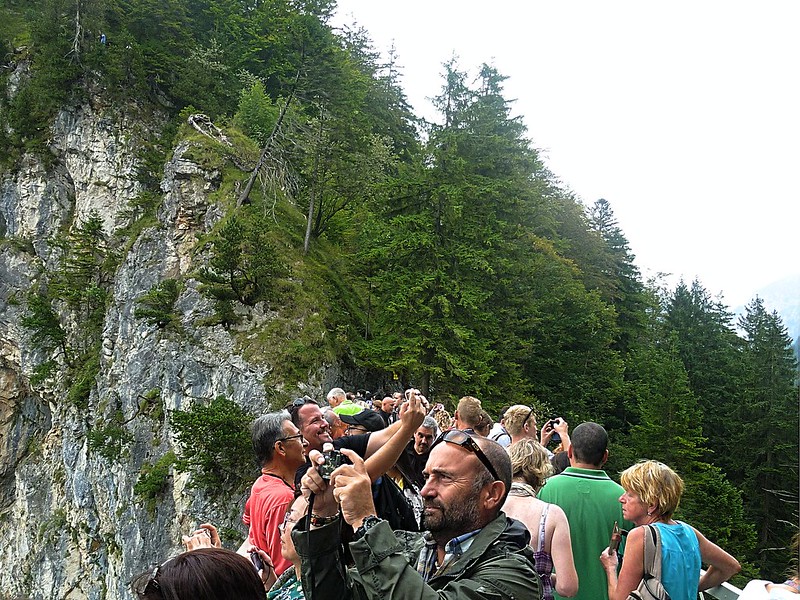 But it’s worth it, because then you get a couple selfie like this: 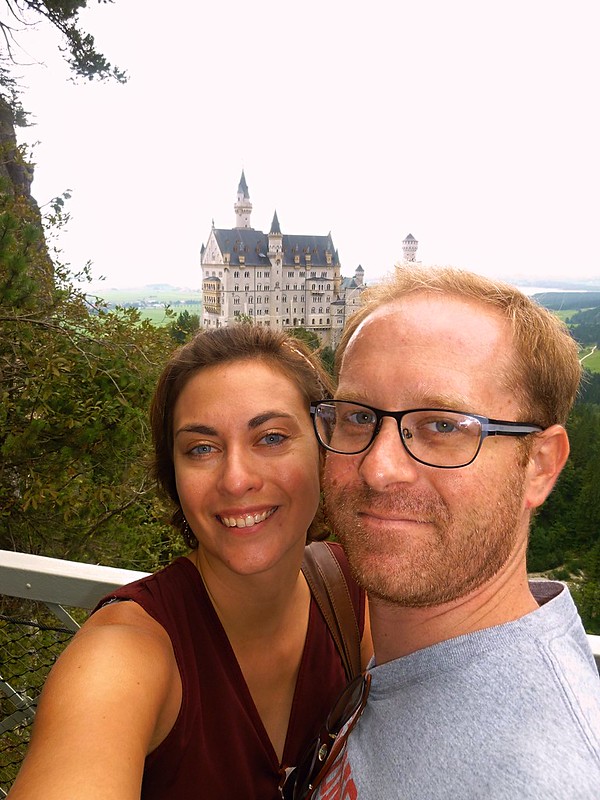 Anyway, Neuschwanstein gets most of the attention, but it’s not the only castle in town. Across the valley is humble yet charming Schloss Hohenschwangau, which is worth a look if only because it offers some relief from the Neuschwanstein crowds. 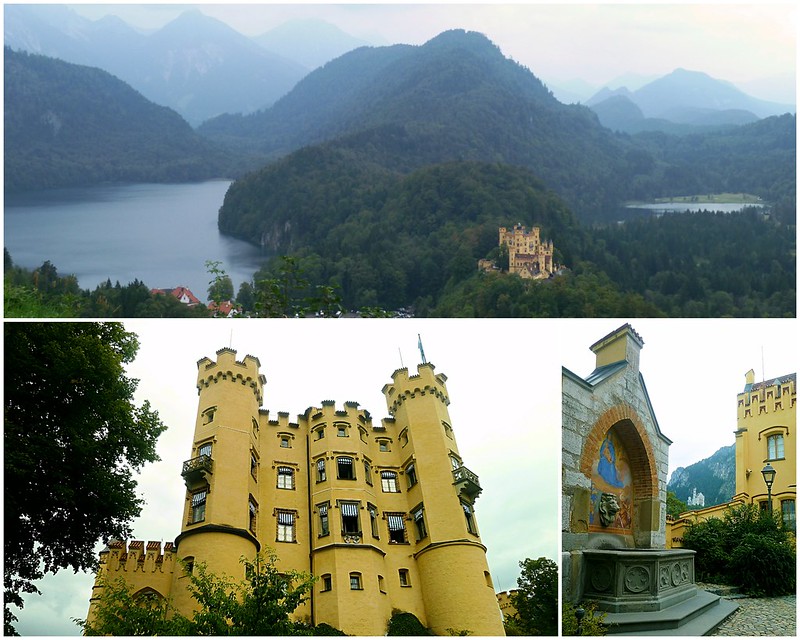 Hohenschwangau from Neuschwanstein and vice versa.

After our lovely day trip, we returned to our hotel in Munich for one more night before heading north — and that’s when we realized we were in need of some royal fortification of our own. Our room safe was in lockdown mode, which means one thing: it had been tampered with, most likely by the housekeeper. And unfortunately, lockdown means you’re locked out, even if you enter the correct code.

There are few things that will make you question your life choices more than getting yelled at by an incompetent desk clerk at 1 a.m. about how “your safe is not my problem.”

But if we’ve learned anything about living with Europeans for the past year, it’s that you have to be persistent if you want someone to do their job. After more yelling with the night manager — who initially shrugged and said someone would call someone in the morning — she finally produced the super-secret master key to the room safes. (If you ever need to know: there’s a panel on the bottom of the safe, under the code pinpad, that can be removed to reveal a keyhole. Also, for the love of everything, make sure you enter a real code, not just 123456 or some such nonsense.)

Thankfully, our passports, laptop, and other valuables were still inside. But we were incredibly rattled, both by the tampering and by the reaction of the hotel staff. When we left for Bamberg the next morning, morale was pretty low. 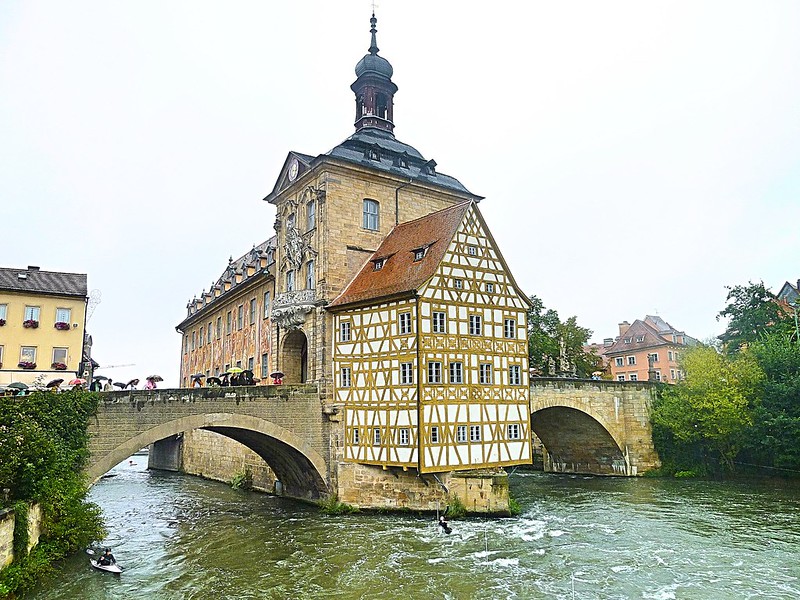 This UNESCO-protected medieval town in northern Bavarian is adorably well preserved, and from the Regnitz River, you can get an up-close view of the 17th-century homes known as Germany’s Little Venice (“Klein Venedig”).

But don’t be fooled by the folksy veneer. Bavarians here are no friendlier here than in Munich. Our Airbnb host had no interest in talking to us, and at one restaurant, an older lady pulled a stool out of Matt’s hands so she could “save it for a friend coming later.” Both waiters pretended not to notice, so we left.

The persistent rain didn’t help things, and at one point, we gave up on exploring and settled in at a coffee shop so Matt could work and Sandy could write. We even talked about changing our train tickets to leave early. 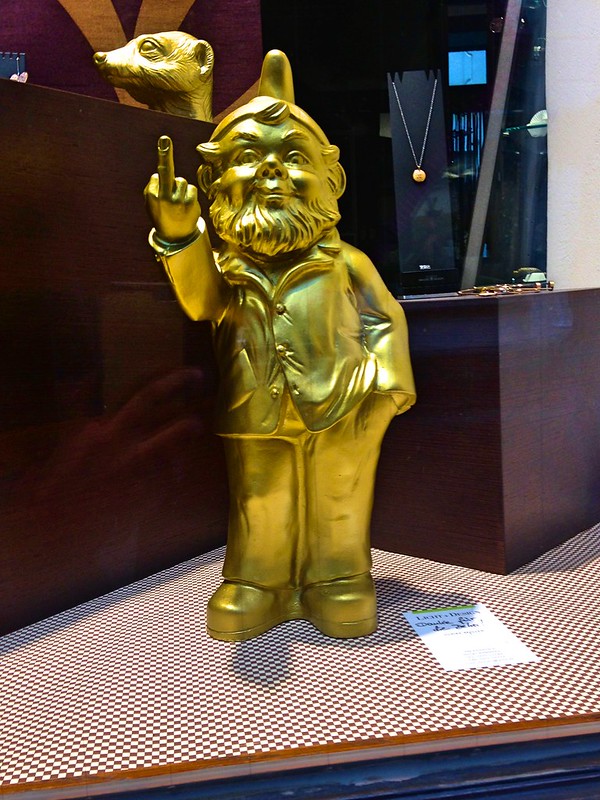 This summed up our impression of Bavaria pretty well.

In the end, though, Bamberg won us over. How? One word: Rauchbier.

Bamberg’s “smoky beer” is dark and malty, with a distinctive bacon aftertaste that you won’t find anywhere else in the world. You either love or hate the flavor, but the experience of trying it in the original Schlenkerla beer hall is worth the hassle — and there’s really no other drink that goes quite as well with foods like “meat stuffed onions.”

Our favorite spot was oldest beer hall in town, Klosterbräu, which was founded in 1333. Though Klosterbräu doesn’t technically make Rauchbier, the three beers on tap here are just as flavorful and much better than anything we drank in Munich. 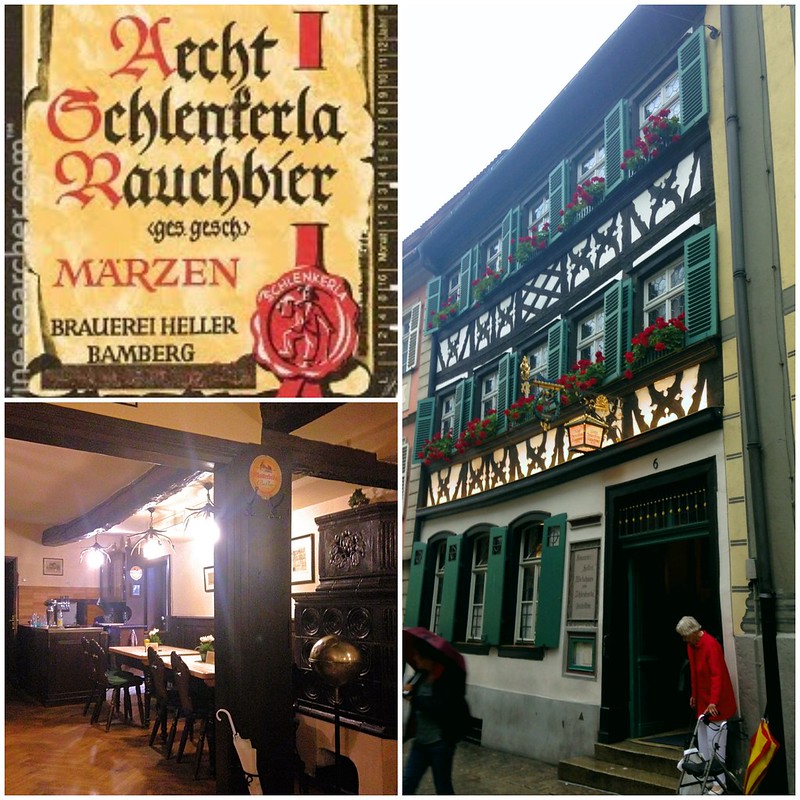 So, by the time we boarded our train for home, we’d more or less made our peace with Bavaria. It’s still not our favorite corner of the world, but at least this time, we gave it a fair shot.