We didn’t learn as much German as we should have while living in Vienna, but I did manage to pick up one lesson: The art of the German language is definitely not in the sound of the words themselves, but instead in the elegance of the ideas and images those words can evoke when they’re smooshed together into little linguistic Schichtkuchen (layer cakes).

Take the word Sehnsucht, for example. Google translates it to “nostalgia,” but this seemingly simple thing is actually much more complicated — just like everything else in Austria. Break the compound word apart and the little words mean “to see,” “to investigate.” Put them back together, and you get something like “life longing,” or “a sense of separation from the imaginative experience we crave,” a translation I particularly like and picked up here.

Anyway, this nuanced sort of longing — not for the reality of an experience but for the imagined perfection of it — is something that speaks deeply to how I felt about being back in Vienna for three weeks after almost a year away. This city never became home for us, not really, but our visit made us feel like maybe in fact Vienna had been, if only for just awhile. 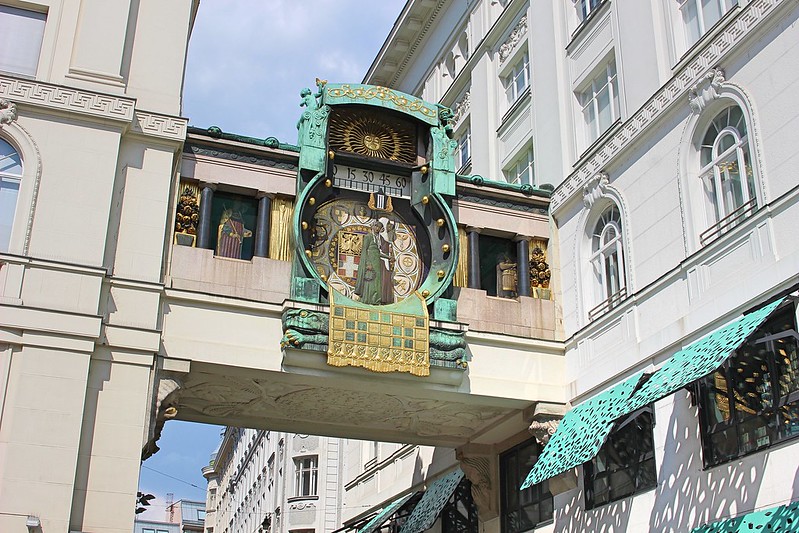 Prague’s historic clock was out of commission this year, but Vienna’s Ankeruhr was ticking as strong as ever, which I took as a good omen for our time in Austria.

After the conference in Prague, Matt had a visiting fellowship lined up in his old department at Universität Wien. And we opted to stay near our former district, which was convenient for him work-wise and also allowed me to wander by our old residence, Frauengasse 19, several times. I waved at the windows I used to write by every day. 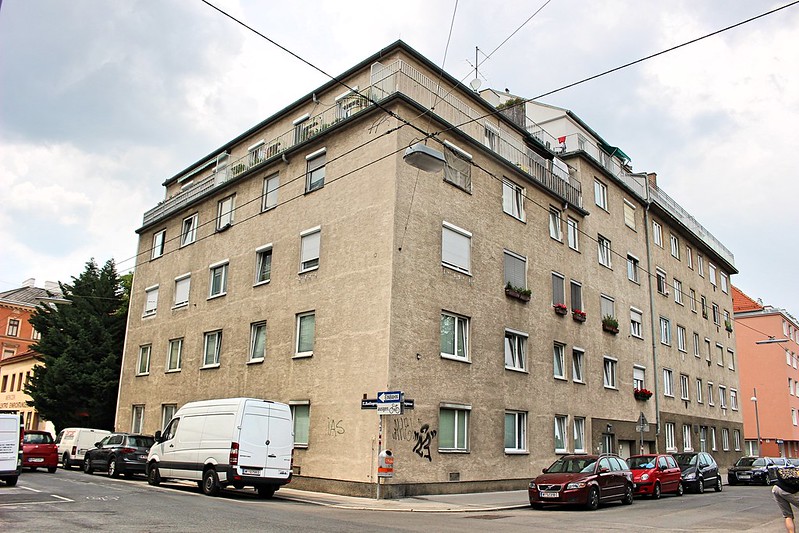 The second windows up from the bottom, on either side of the corner. That was us!

But there really isn’t much to do on our old street, apart from trespassing on a school athletic field or visiting one of the three (!) brothels that have sprung up on the block in the last year. Instead, we spent most of our time on Yppenplatz, a trendy little square that blends Vienna’s Turkish and Balkan immigrants with university students and brunch seekers. 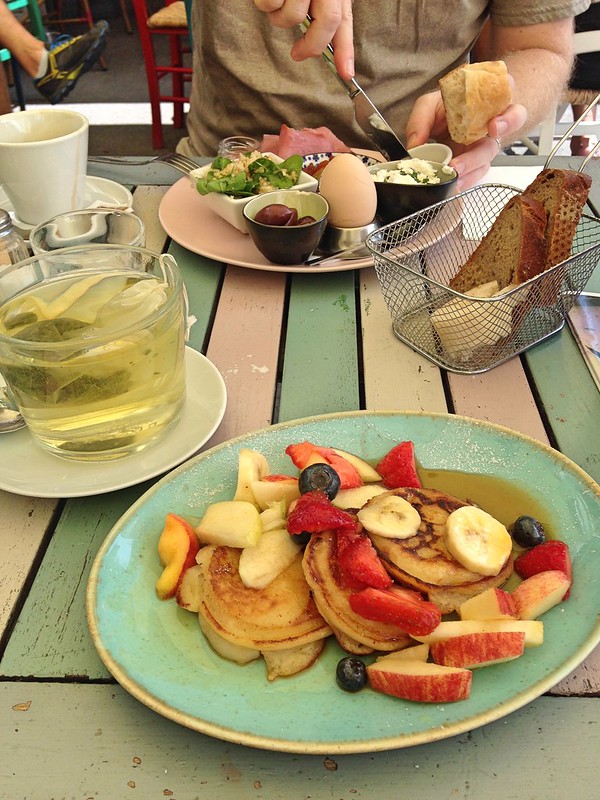 Like I said, there’s a lot of brunch on Yppenplatz.

We got an Airbnb overlooking the square, which made for noisy nights but entertaining days. After all, where else can you watch an effigy waltz from your window, and then head down for schnitzel and spritzer?

Our apartment location also made us neighbors with Trevor and Jane, fellow Americans-turned-expats, who quickly became two of our closest friends while we lived in Vienna. 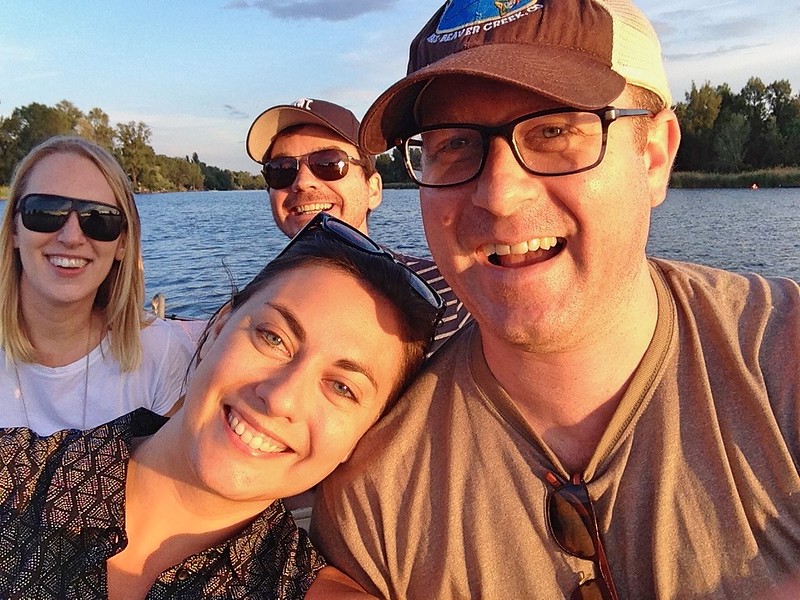 Us with Trevor and Jane on the Alte Donau.

With them, we rented a boat and floated our way down the Alte Donau, a lazy little river that was once a branch of the Danube but is no longer. 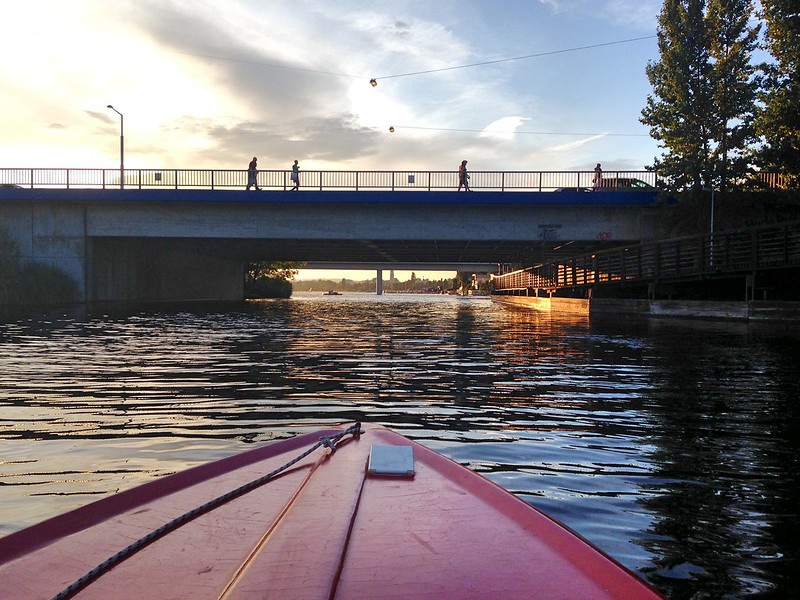 Those folks on the bridge were walking faster than our boat could go. 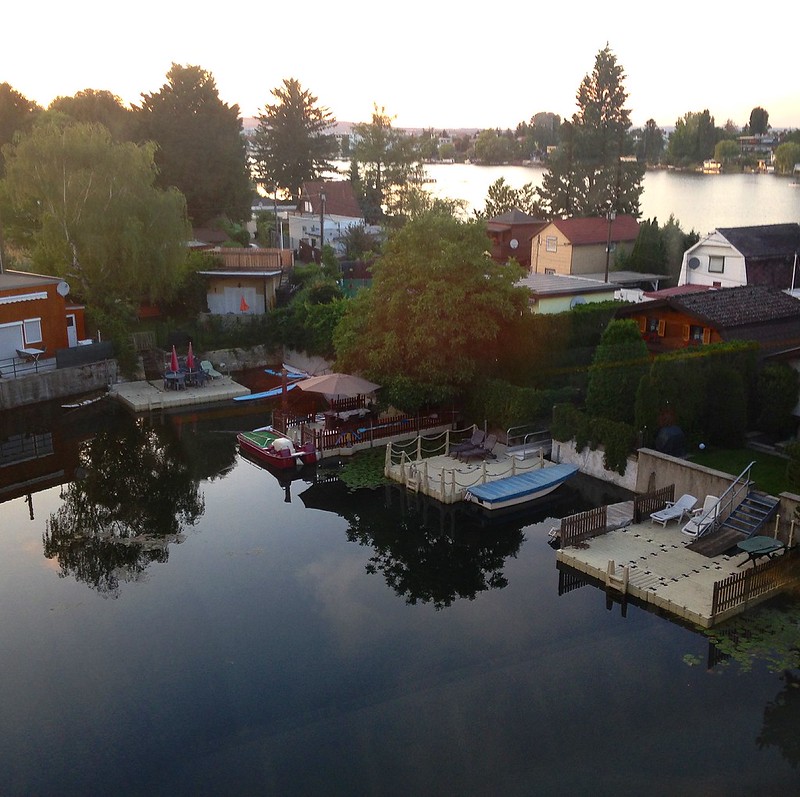 While it was definitely fun to do a “new thing” in Vienna, it also brought on a pang of realization that there was so much more to do in the city, that we’d really only managed to skim the surface while we lived there.

But ultimately, the primary focus of our summer stay wasn’t about checking items off an infinite bucket list of activities. Instead, we were more interested in seeing old friends and revisiting our favorite things. And I wasted no time in doing just that: the day after we got to town, I got drinks with my buddy Gwen, a globetrotting medieval historian from Indiana who is now a card-carrying Dutch citizen. 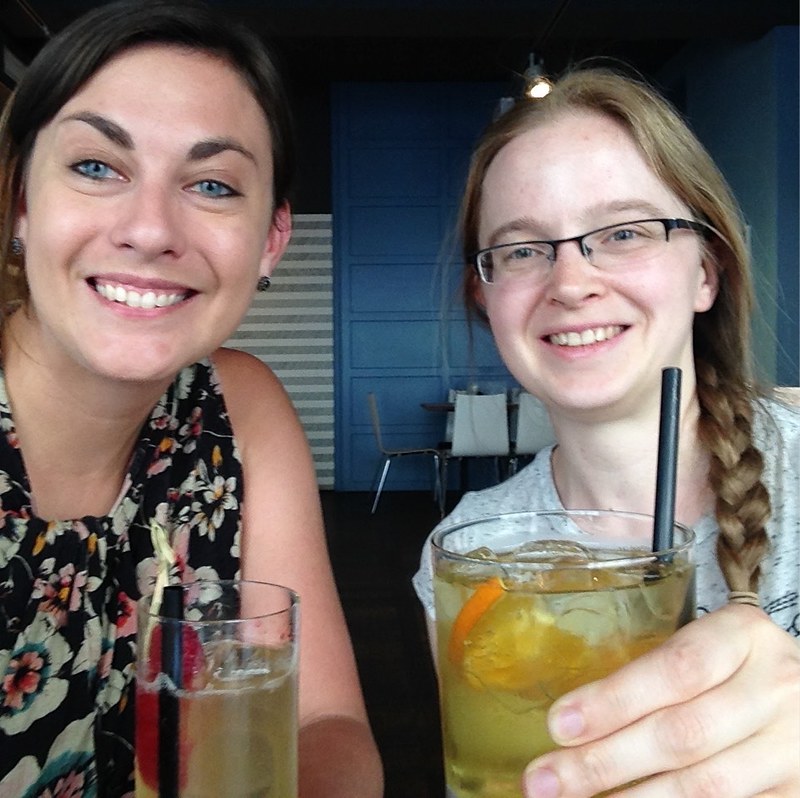 I also had a couple of adventures with fellow writer Connie Miedler, a.k.a Miss Euro Blogger. One of them was a wine & paint night that put our creative talents to the test. 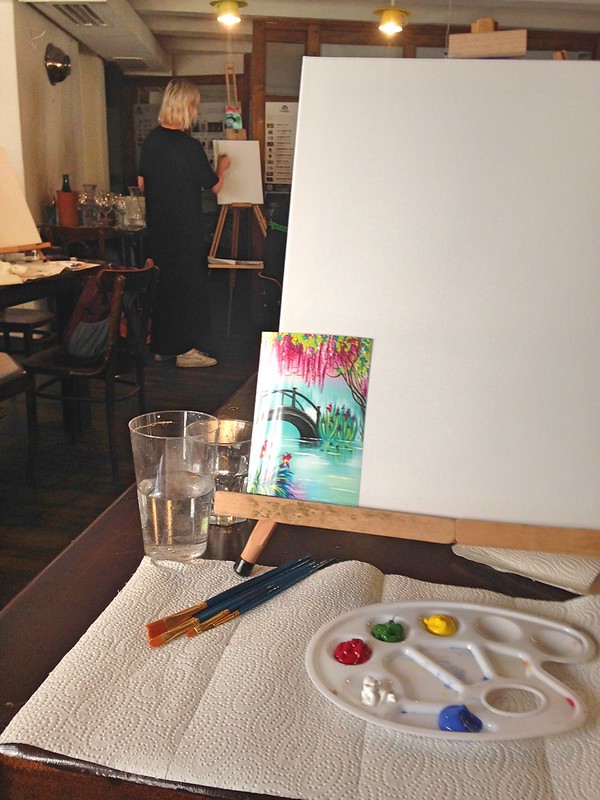 Here was the prompt, along with the friendly art student who was there to show us how to execute said prompt. 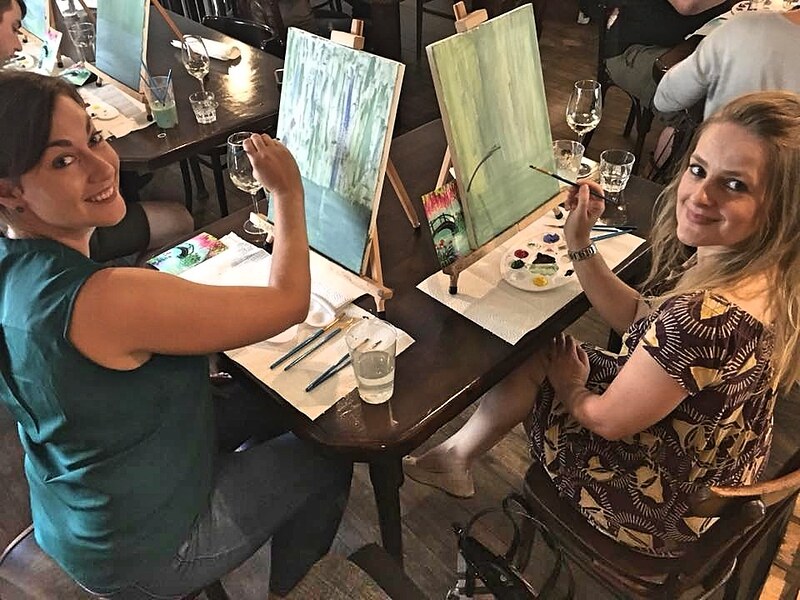 You can tell already who’s better at following directions. 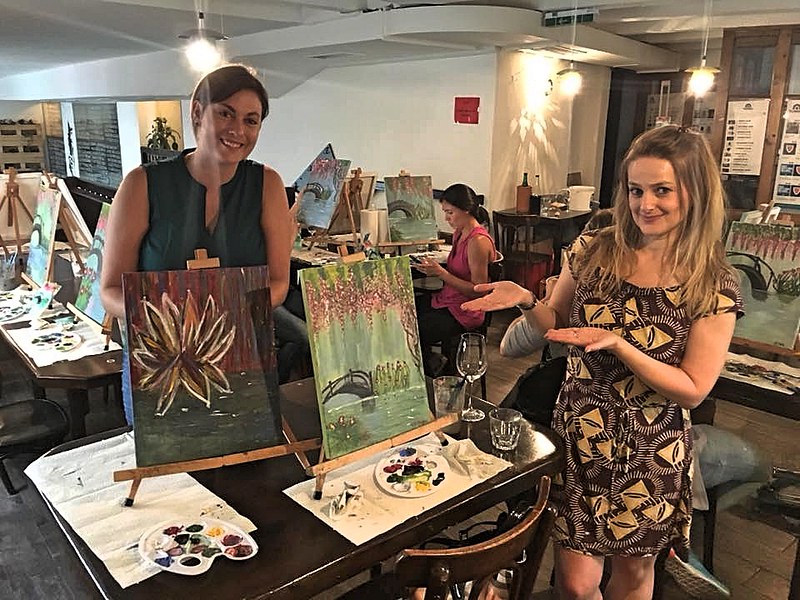 Almost everyone in the class approached me to express their … amazement … at my work, which I dubbed “Exploding Bridge.” And yes, despite multiple obstacles and all common sense, I brought this baby home to hang on the wall in Alabama. 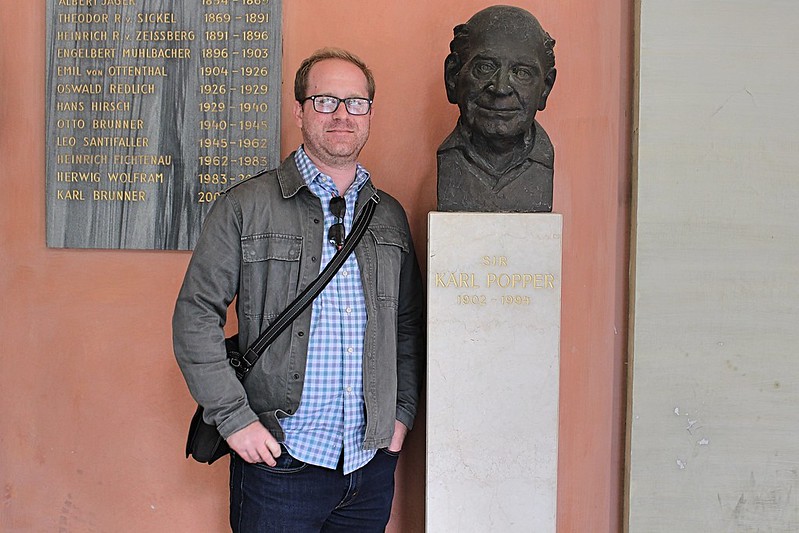 While I was “arting,” Matt was working at the university — and catching up with his own old pals, like this guy.

Anyway, you get the idea. Both Matt and I made our social rounds in town, though we did do a little re-wandering together, too. 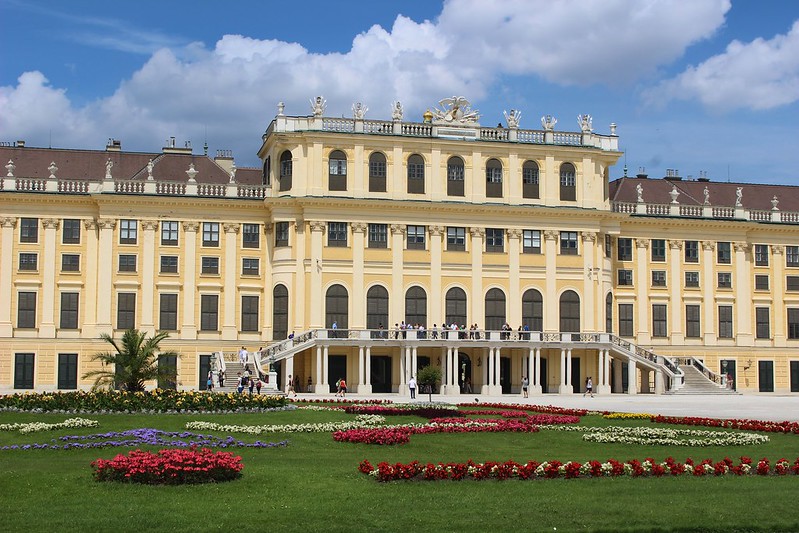 Schönbrunn, you’re as fabulous as ever. 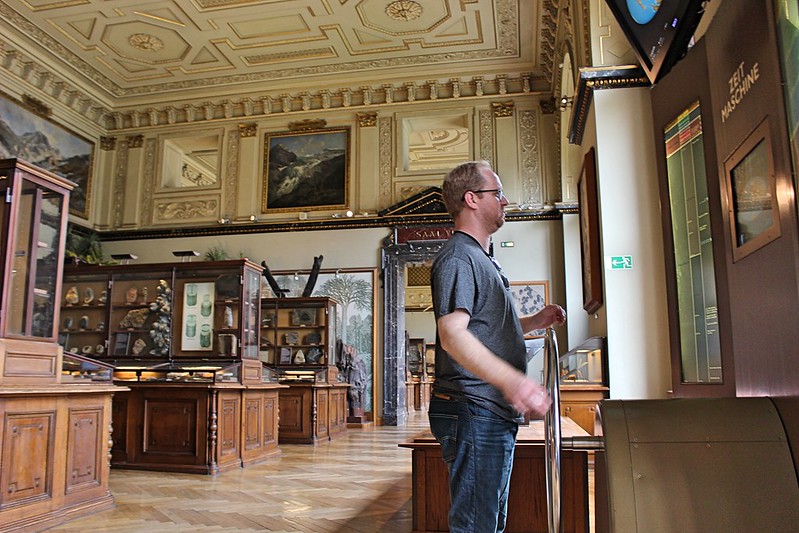 Matt found a LITERAL TIME MACHINE (Zeit Maschine) at the Natural History Museum. He spun it backward, and we all now live in the Paleolithic Era. You’re welcome.

In addition to catching up with our people, our secondary goal for Vienna was to test out a new travel model for ourselves: “working travelers.” Instead of traditional backpacking, where folks tend to move from city to city every few days, we stayed put long enough to settle in. Long enough to buy groceries. Long enough to see the same folks in the building hallway more than once. Long enough to sleep in some days without worrying about “wasting time.” Long enough to just be, instead of always having to do. 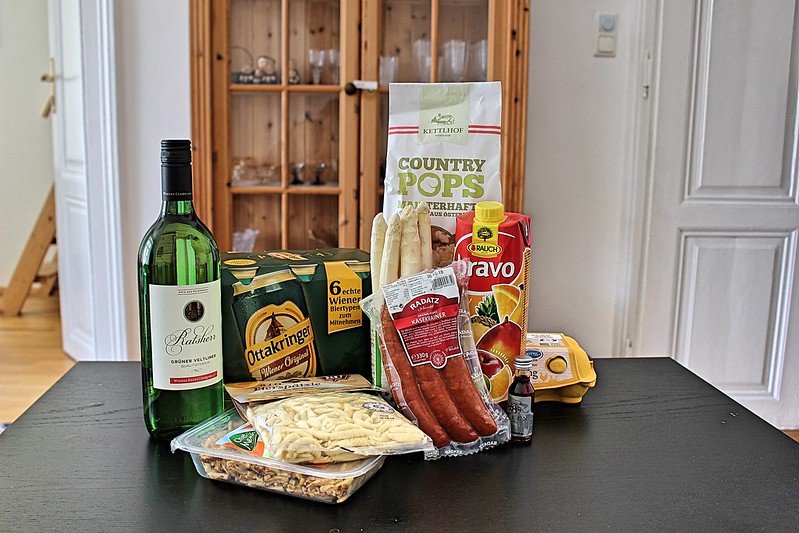 Part of my first round of Austrian groceries. The Viennese are obsessed with white asparagus. Truly, deeply, irrationally obsessed.

Our new model wasn’t always easy; we both had sizable projects to balance with our sightseeing, which tugged at us while we were out-and-about — but we also felt guilty about working too much on any given day. This sense of feeling torn between work and play bugged me in particular; time on the road is valuable in a different way from “billable hours,” but our projects financially enabled this trip and required a fair amount of our attention and energy. 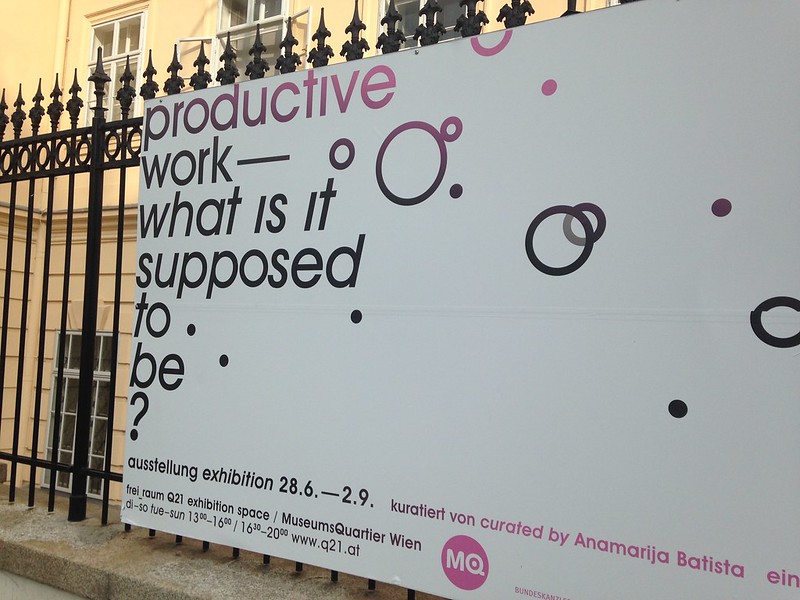 Sometimes, Vienna speaks to me loud and clear — and in English.

But overall, we did our best to strike a balance, and we both agree that “slow travel” is probably the most sustainable approach to our future adventures. It just takes discipline — and excellent Wifi. 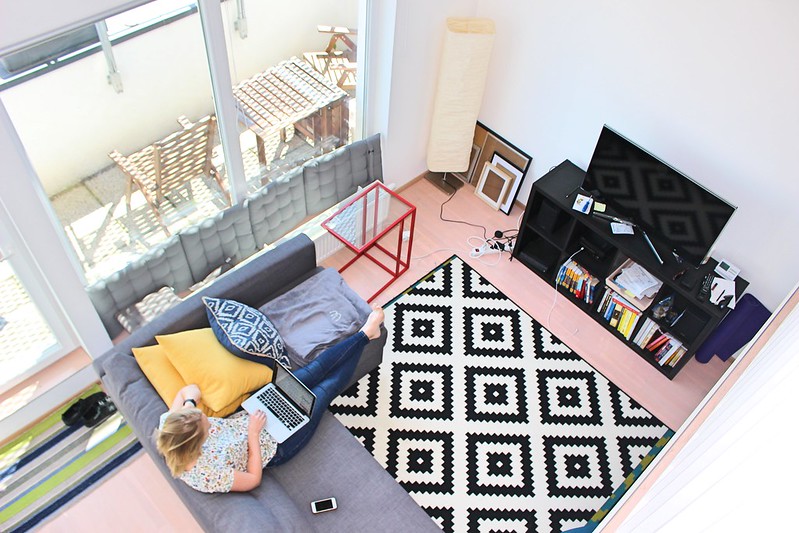 Jane’s been playing the remote-work game for years, and she makes it look much more glamorous than I do.

Just before the end of our time in Vienna, I went to the same place I did a couple of days before we left Austria for Alabama last year. Ruprechtskirche isn’t the fanciest church in Vienna, but it’s definitely the oldest, founded in 740 and named for the patron saint of salt merchants. But to me, it’s a private, almost forgotten little corner of Vienna’s Jewish Quarter, in the otherwise bustling-and-touristy First District. 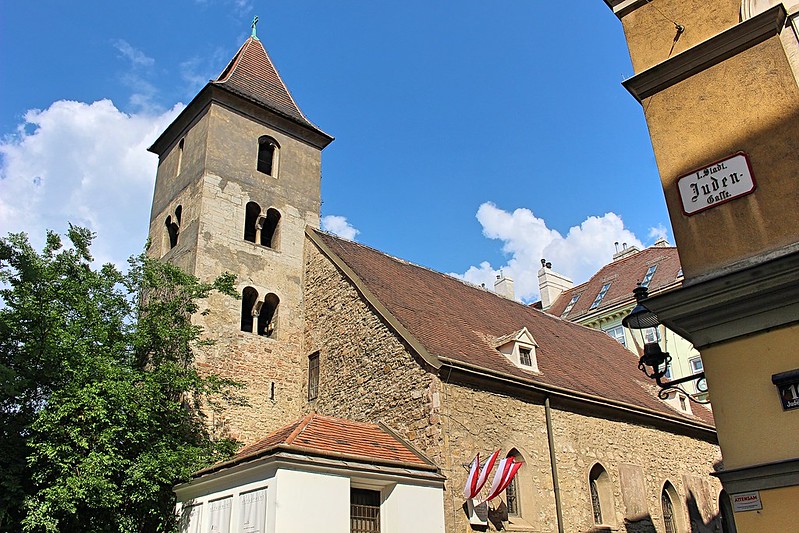 It may not look like much, but I’ll always think of Ruprechtskirche as a little bit “my place.”

There’s something comforting and grounding about being in a place that’s been around for so long and is still being used for the same purpose today that it always has been. It’s a good place to light a candle and sit with the caretaker on a hard bench, staring at a modest stone altar until you get shy and go back outside to sit alone on the steps instead. 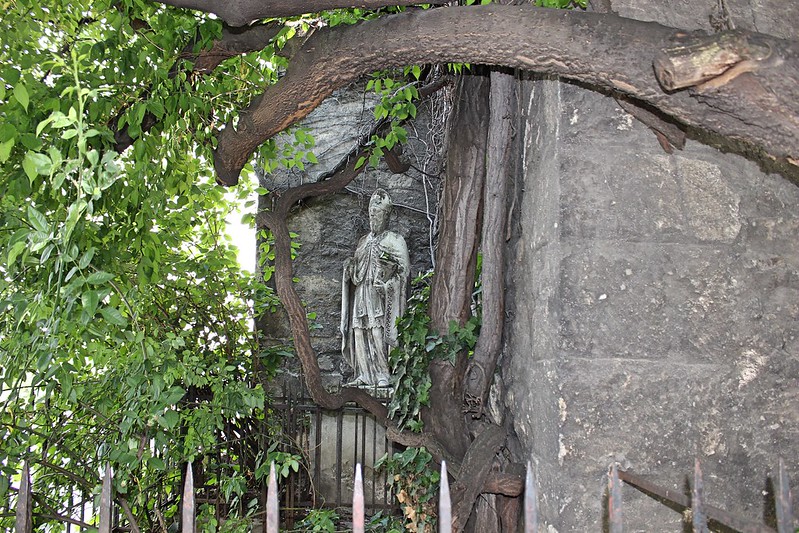 I cried both times I came here, and I like to think the salt patron knew exactly what to do with those offerings. 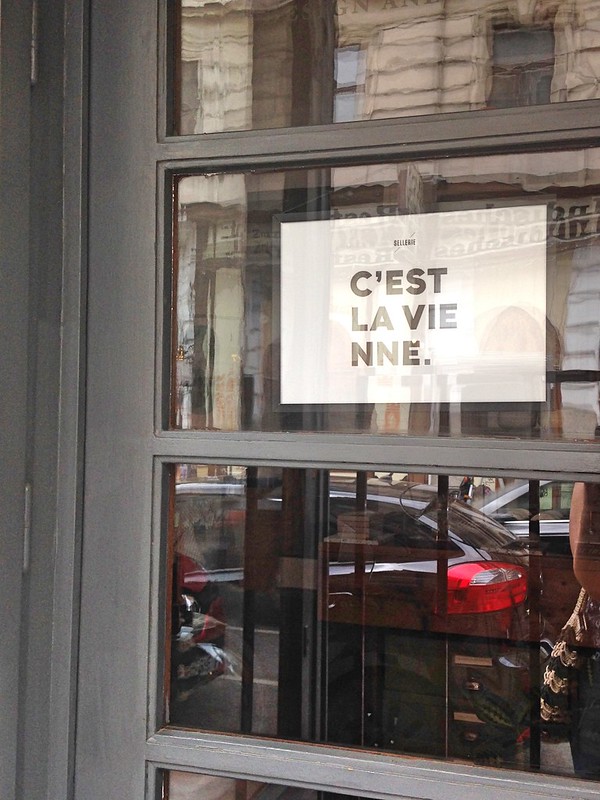 Okay, I do know enough German to know this is a FRENCH pun.

I needed all the blessings I could get from St. Rupert. Because from Vienna, we flew to a radically different world from central Europe: Marrakech.

One thought on “Our Vienna Homecoming”