In 2012, we backpacked from Ireland to Croatia over the course of about two months. This past weekend, we retraced our Amsterdam steps, but this time, we had the time and cash to take more advantage of the food culture — and sightseeing — this city has to offer.

Here’s what we did:

1. Stayed at the Hotel Verdi, a hole-in-the-wall hotel that has seen better days but still has a homey if oddball charm — and really friendly owners. The decor includes lots of miniature dolls, faded classical music posters, a brutally vertical staircase, etc. This is one of the hotels we stayed in as backpackers. Seeing it through more experienced eyes was … interesting.

2. Ate well. So very, very well. First night, we visited Foodhallen. This is what would happen if the Taste of Madison turned into a late-night munchie market. You could get bitterballen, steak sandwiches, eggrolls, and sausages. We know, because we ate all of those things. And a few more, including stroopwafels, poffertjes, and frites with peanut satay sauce. (Not all in one sitting, I swear!)

3. Made reservations for Mossel & Gin, a restaurant that specializes in, well, mussels and gin (which evolved from a Dutch liqueur). This was one of best meals we’ve had in Europe so far. Hands down. And, in general, when it comes to restaurant service, the Viennese could learn a lot from Amsterdamers.

4. Visited Amsterdam’s hippest craft brewery, Brouwerij’t Ij (pronounced “ai” or ay”). This is the closest we’ve come to finding Wisconsin-style craft beer, with heavy, bold flavors. Oh, and it’s in a historic windmill. And though they don’t serve cheese curds, they do have cheese CUBES. A local farmer feeds the brewery’s leftover grain to his sheep, and he then produces cheeses that he sells back to the brewery to feed the hungry masses. They sprinkle some sort of seasoning salt on the cheese. I don’t know why.

5. Floated. After eating this much, it was hard to walk around the cobblestoned canals. So instead, we hopped on a tour boat. 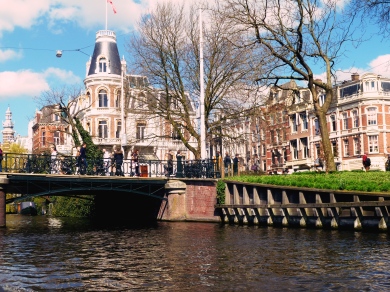 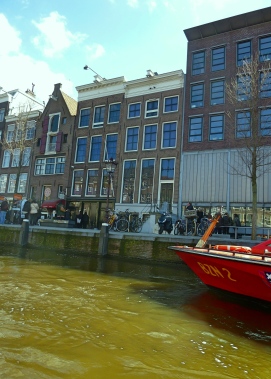 View from the Ij

6. Re-visited Vondel Park. We spent a lot of time in this park on our last visit, and it was cool to try to pinpoint the same spots we sat in. We found a couple:

7. Got cultured. Last, but definitely not least, we went to the Van Gogh Museum. It was absolutely packed, but it’s one of those “gotta do” things that we skipped last time. The famous Sunflower painting is here, along with Wheatfield with Crows, Irises, and several of his self portraits. Click the link to see what we saw.

Bonus: A few more architecture shots! And fun fact: Many of the buildings along the canals were constructed on an angle so that merchants could deliver (by way of pulleys) to the top floors without whacking the bricks. This gives the buildings an odd look; some of them appear to be straight-up crooked or, in some cases, falling over, but the tour guides assured us they’re all just fine. 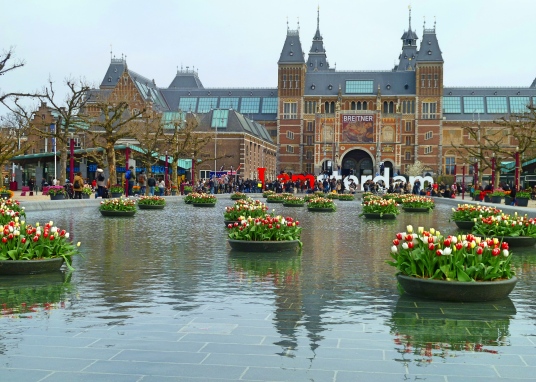 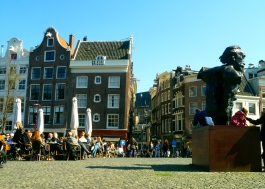 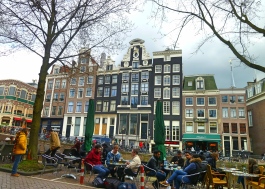 View from the Red Light District