Nowhere blends the beautiful with the absurd quite like Prague. Last weekend, my brother joined us as we braved the cold to check it out.

We began our trip with an evening walk through Staroměstské náměstí square, in the heart of Old Town. We found the Prague Orloj (astronomical clock), along with the Church of Our Lady Before Týn. 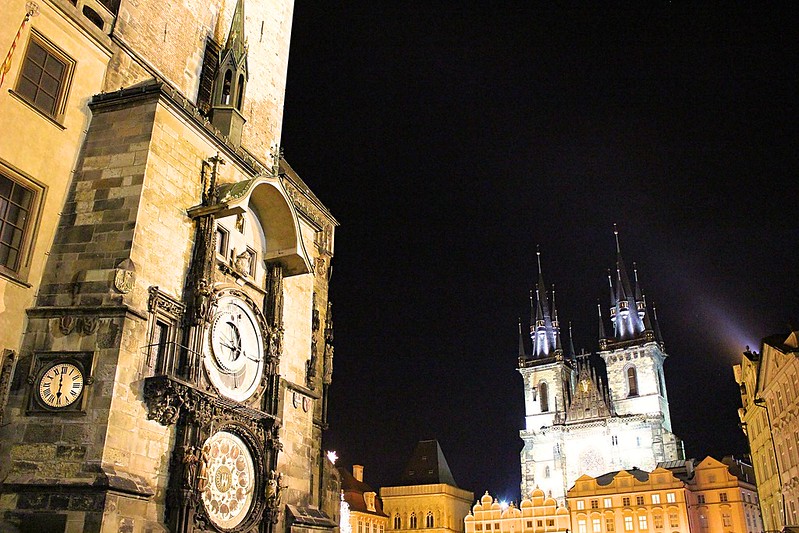 So much pretty in one place. 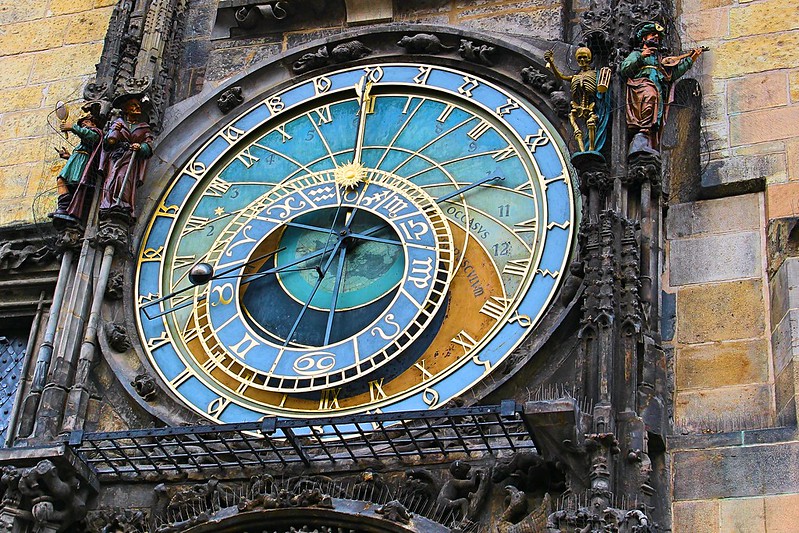 Built in 1410, the Orloj is the oldest astronomical clock still in operation. 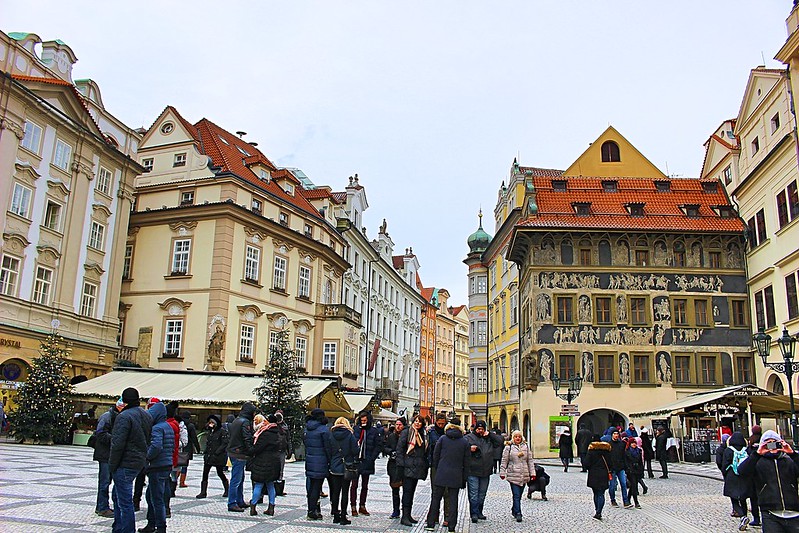 In front of the Orloj.

It was too cold to walk for long, so we kicked off the gastronomy portion of the weekend at the Prague Beer Museum, which isn’t a museum at all. Good pretzel exhibit, though! 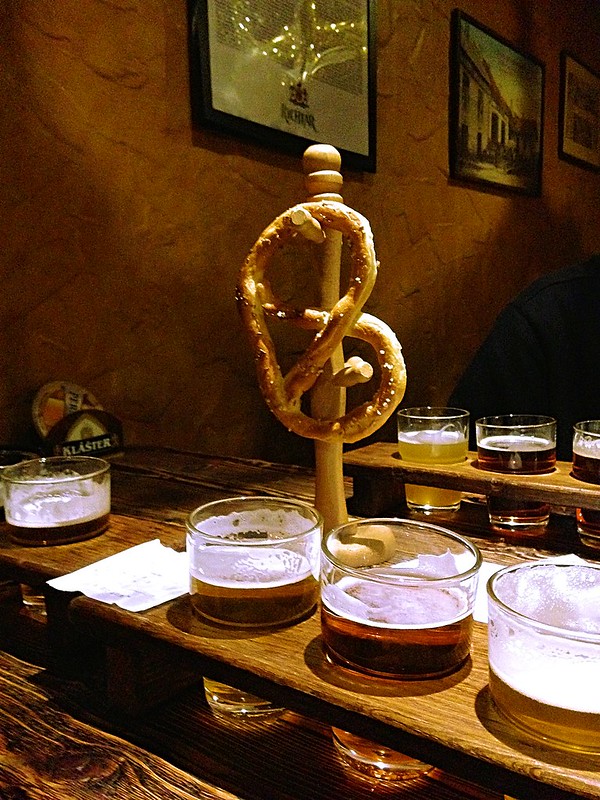 We trained all the way to Prague to catch this flight …

For dinner, we happened upon tiny U modrého hroznu, a homey Czech restaurant whose proprietor seemed surprised that we came in. I had terrific goulash and houskový knedlík, dumplings made with stale bread cubes. 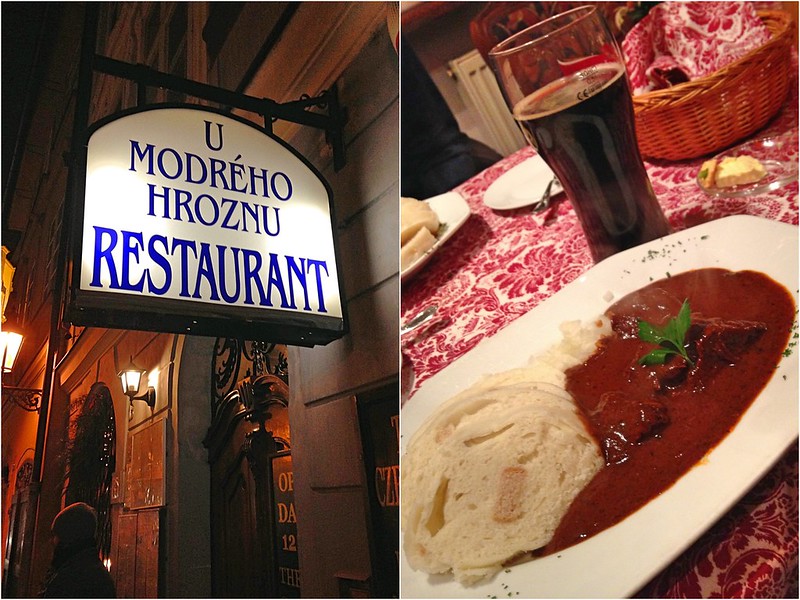 Our final stop of the night was at U Kunštátů, a  trendy “beer club” with a distinctive cow statue at the entrance. The place was totally full when we walked in; if that happens in Vienna, the host typically waves you off with a frown and a lecture about making a reservation. But the Czechs take a different approach, called capitalism. The host snuck us into the back corner of a room with a beer-tasting event in progress. At first we were told to sit with our drinks on the floor until the event was over, but another server cleared off an actual table for us. 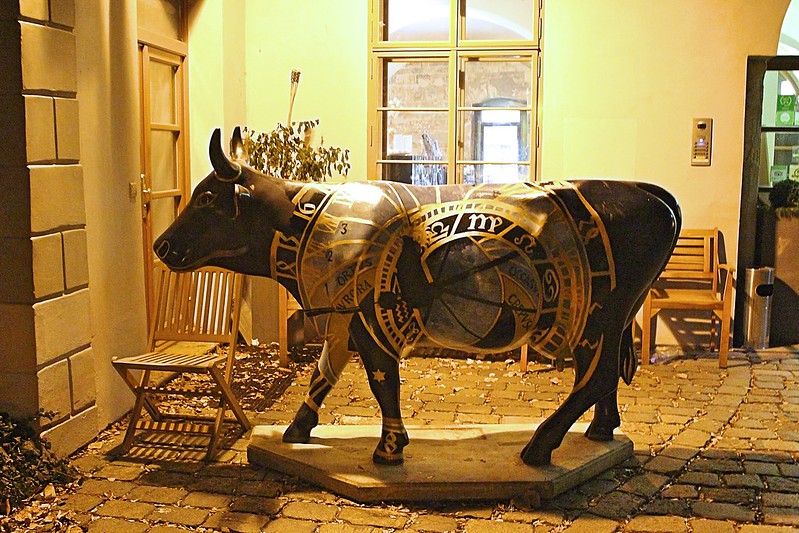 Wait, there are cows outside of Wisconsin?!

The guy leading the beer tasting didn’t even blink at the fact that we were crashing his party. We watched his video tour of the nearby Pils plant, home of the original Pilsner and listened to his stories about Czech politics — and about the Czech “tradition” of taking whatever one can get …

The next morning, we got up early to visit Prague’s major medieval attractions. The Charles Bridge runs across the Vltava River, connecting Old Town with the castle complex. It’s a surprisingly long bridge (which feels even longer in the cold) and is peppered with stone statues depicting violent religious scenes. 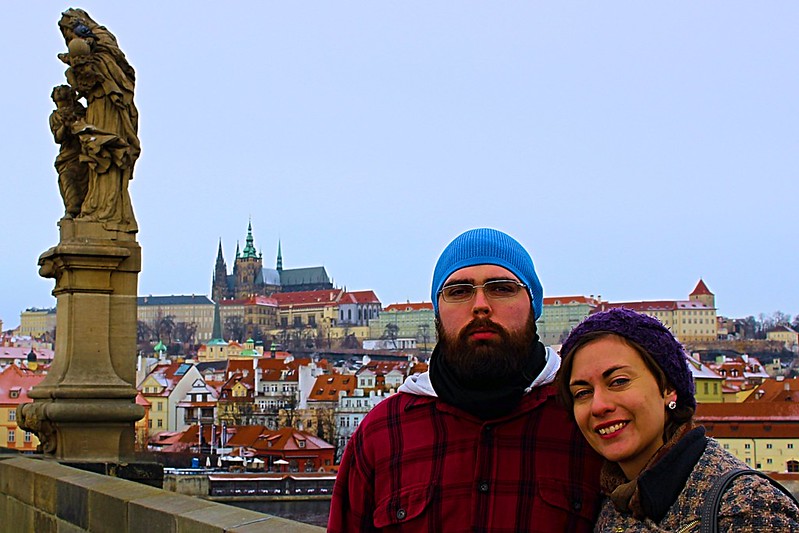 Paul was thrilled that I made us pause for a photo.

The castle end of the bridge is congested with jewelry vendors and selfie sticks, but there’s still a little magic to be found in the experience … 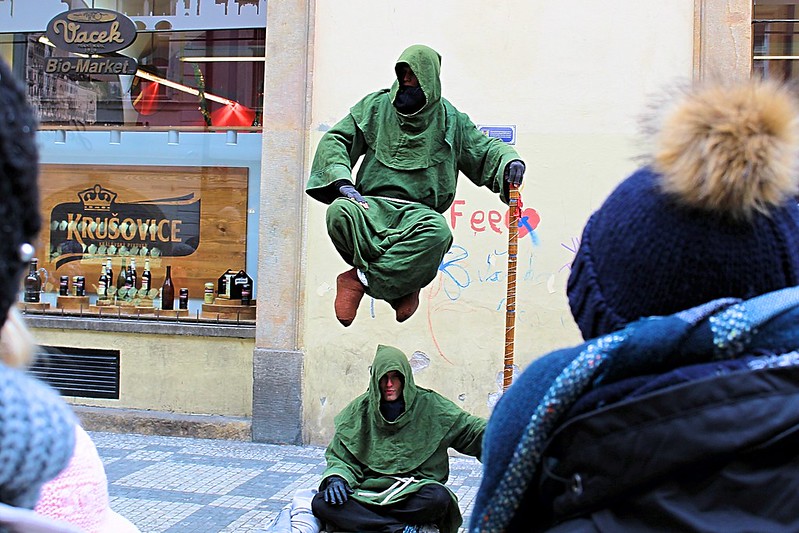 See? Dumplings won’t weigh you down.

The bridge was only the first part of our journey, though. Next came steps. Lots and lots of steps. At the top, we joined a security line that stretched all the way across the castle plaza. The ever-thoughtful locals offered some entertainment as we waited:

After passing through the metal detectors, we finally got to see what all the fuss was about. Pražský hrad dates back to 880 AD and is the largest medieval castle complex still intact. Its centerpiece is St. Vitus Cathedral, built in the 900s to house the severed arm of St. Vitus. It’s a spectacular building that’s impossible to fully capture in one picture. So here are eight: 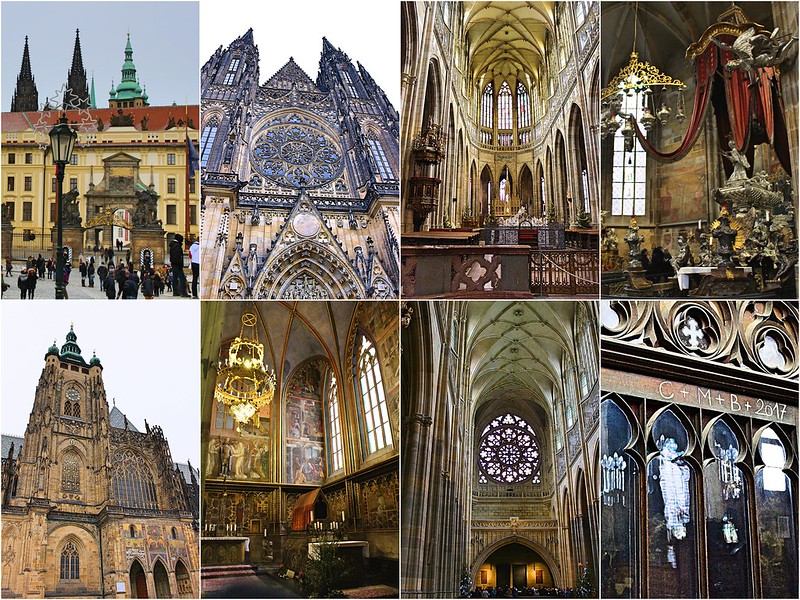 Top left: The cathedral’s spires stick out above the castle entrance. The rest are details from the cathedral, both inside and out.

Our tour ticket also included a handful of other structures inside the complex. The royal palace is mostly just an empty presentation hall, but St. George’s Basilica is a weird little gem with faded frescoes and unnerving skeleton art. The last section of our tour was a stroll through “the Golden Lane,” a series of preserved medieval shops that now mostly display armor and torture devices. You can also buy puppets. 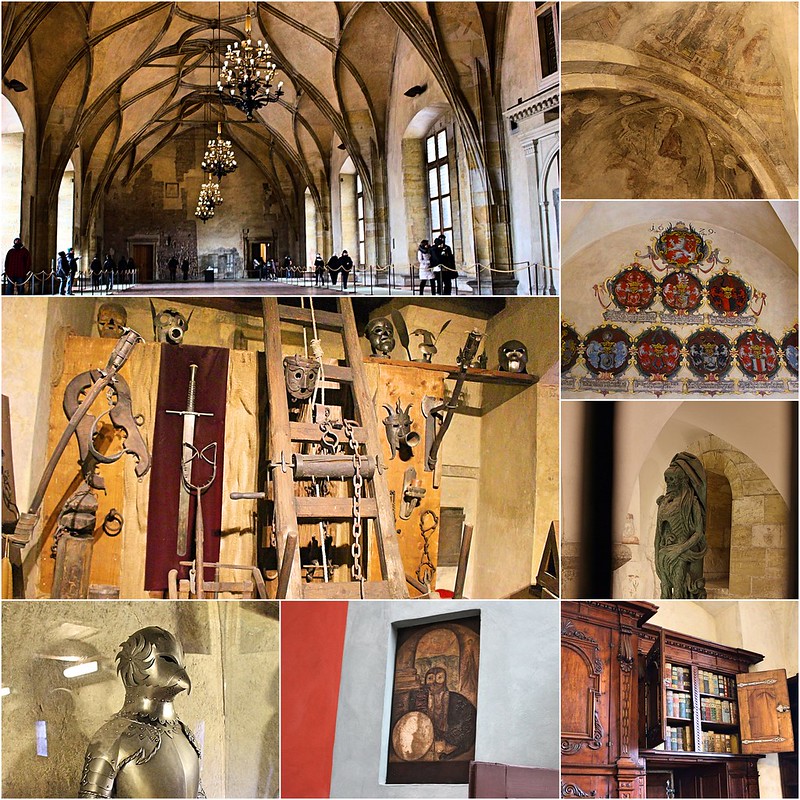 Quirky scenes from throughout the castle complex.

After the castle, we made our way south to the Malá Strana neighborhood so Matt could retrace his post-college backpacking steps. We saw his old hostel (a gymnasium full of cots) and ate more goulash and dumplings at a hole-in-the-wall nearby.

We then undertook our evening mission:

Absinthe tasting is on the must-do list of just about every American tourist in Prague, thanks to Hollywood. But guess what? Absinthe is not really a Czech thing. And, frankly, Czech-made absinthe is the roughest shot of diesel fuel you’ll ever take. (We know because we bought a cheap bottle of it when we arrived and attempted to drink it in the hotel. Matt lit the shots on fire, and let’s just say that also works better in the movies.)

However, Prague has fully embraced the absinthe trend (because capitalism), and a handful of higher-end bars have made an art of it. We tried the Absintherie, which offers an extensive list of quality French- and Swiss-produced absinthes. The process is fussy: Water in a glass dispenser is chilled dramatically with dry ice and pipetted onto a sugar cube, which is suspended on a decorative spoon over a jigger of absinthe. When the sugar cube is fully dissolved into the absinthe, you stir up the mix and sip it like a glass of wine. 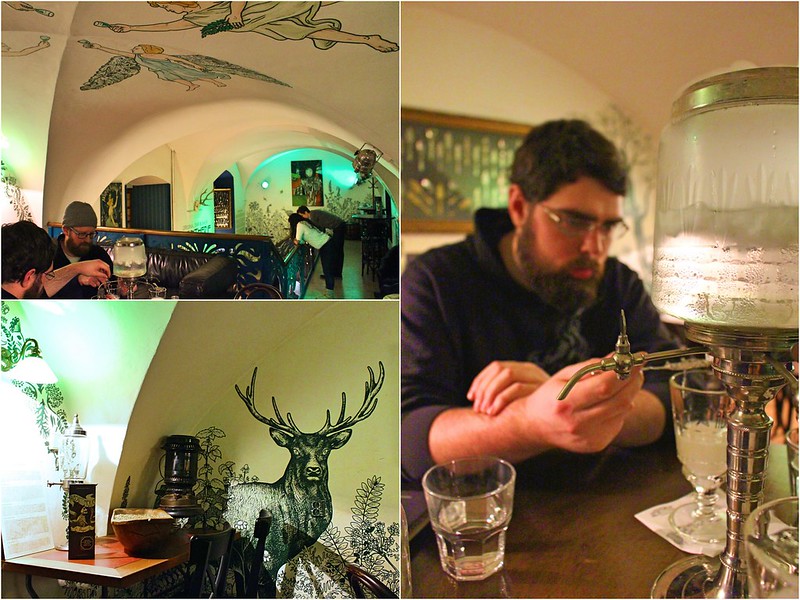 The Fairy has a few teeth, though, and in the morning, we opted for a relaxed agenda. We moseyed through the Kafka Bookstore on Staroměstské náměstí and settled in with our new acquisitions at Cafe Ebel. (I bought a copy of the The Metamorphosis, which was written in Prague and is weirder than anything the Green Fairy will ever show you.)

After a couple of hours spent reading and people watching, we ate a late lunch at Fat Cat Burger & Fries and headed back to the train station. Mějte se, Fairyland!